Liñeiras has a new resident, and I’m desperately in love.

She’s twenty-eight years old, of a chalky complexion, some might say she’s a bit of a looker, will go anywhere and do anything, likes to get dirty, is a bit rough round the edges, and weighs in at just over two tonnes.

Ever since I was a young child I’ve had a love of Land Rover Defenders (and of course, Ford Transits). The ultimate utilitarian vehicle, driven by mechanics and monarchs, farmers and financiers, hunters and hooray Henries.

Five years ago I had a brief affair with a 1986 petrol Defender which I drove to Spain and used around the house for three months before bringing it back to the UK and sadly selling her. In Spain she spent a lot of time broken down, the never ending catalogue of mechanical disasters can be read in earlier blogs. It is not possible to re-register a right-hand drive agricultural vehicles in Spain so the only option was to let her go, and the last I heard of her she was being used to transport dogs for their daily walks to save the leather upholstery of her owner’s brand new BMW.

After my long contract in Belfast last Winter I promised myself a ‘runaround’ for Casa Liñeiras and the only real option in my mind was a Land Rover. After all of the problems that I had last time with a British built, right hand drive petrol, I was determined to do it right and get a Santana assembled (under license) Land Rover, with a stock Diesel engine, and standard Spanish parts.

I’ve spent months scouring the small ads for one at the right price, decent condition, sensible miles, and in our part of the country. I’d been to see one previously but it had been to the moon and almost back and the chassis was in awful condition due to extensive farm use. In addition they wanted €2,000 and I could see it eating double that over the next year to keep it mobile.

Many hours searching equalled many hours of frustration. 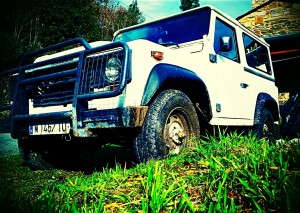 It was love at first sight. It turns out that she’d had one owner from brand new, had spent her life on the roads of originally Madrid (not in the fields), latterly Leon (before the sad death of the aged owner), and had a fully stamped up service history to go with the original toolkit, manuals, keys, and working locks. It was like a time capsule, back to the days of Kylie and the Pet Shop Boys, Rainman and A Fish Called Wanda, Margaret Thatcher and Ronald Reagan.

I couldn’t get my money out of Amanda’s purse fast enough. I’d seen worse condition Santana’s advertised with higher mileages for double the price. I must have been the first to see it over the sleepy Christmas period. We shook hands and agreed to return on Thursday to jointly visit a solicitors with the vendor and officially complete the transaction.

However, nothing is ever straightforward here.

When we met the actual vendor, the father of the guy who’d shown us the car, he wasn’t sure whether he really wanted to sell and it appeared he’d been bullied into it by his sons. He’d forgotten his Identity Card (perhaps deliberately) and my paperwork, despite only being six months old, was deemed too old for the authorities necessitating a re-issue for me to email over after the A Pontenova bureaucrats had worked their snails-pace magic. After a tense hour, and both promising to chase up our absent paperwork, we managed to prise the keys from the vendor, hand over the dosh, and drive her the 65km home.

The neighbours love her, including Oscar who was keen for a test drive and managed to get her stuck in a ditch for five minutes. She’s a car for life for me, and I already have a long list of wants and improvements, but she’ll be handled in the same way as the house, ‘poco a poco’ (little by little).

The top speed is just under 100kmh (62mph), 0-60 acceleration is measured by a calendar, and she has plenty of idiosyncrasies. But I’m besotted, she’s a belter.

This entry was posted in Local Life and tagged Neighbours, Roads, Vehicles. Bookmark the permalink.