Galicia, we’ve had this little chat before and I’m sure that we’ll have to have it again in the future.

Your parking is atrocious, dangerous, illegal, inconsiderate and sometimes plain daft. I suspect that the Spanish get their driving licences out of Christmas crackers, for the majority of them certainly have no idea how to conduct themselves on the nations by-ways or how to terminate their journey in a safe and satisfactory manner.

I’m particularly vexed on this subject for two reasons.

The first is that Amanda and I are now the proud holders of Spanish driving licenses which rather than falling from a festive celebratory explosive device, put us through the mill of bureaucracy and spat us out as two finely ground down individuals.

Amanda suggested that it would be a good idea to trade in our UK licences for their Spanish counterparts for a couple of reasons. The first is that it makes renting a car when we return to UK a far simpler exercise as we wouldn’t have to print out one of the DVLA forms to show our points status, and we don’t have to maintain a credit card to a UK address for the rental company to use as collateral. Secondly, and more importantly, anyone moving to Spain should theoretically change to a Spanish license within six months of making it their place of permanent residence, and we’ve been here for almost two and a half years.

What ensued was a military style operation to assemble all of the relevant documents, get our photos taken, undergo a medical, download and complete the correct form, pay online in advance of attending the police station in Lugo, and then make two 100km return journeys and spend hours waiting in lines.

We needed; our residence card, a colour copy of our passports, a colour copy of our UK license (both sides), our National Identity Number, our certificate of registration with the local council (issued within the last 90 days), a proof of payment for around €30 each, two special driving license photographs, and our medical certificate (including a coordination test which resembled playing 1980’s computer tennis) which cost us another €40 each.

Mercifully there was no need for a driving test but the morning of our medical appointment (with the coordination test) followed a very heavy and late night of drinking which had seen a friend and myself demolish a bottle and a half of single malt. I’d asked Amanda to drive to Ribadeo for the test as I was convinced that I was over the limit, and as I sat in the chair to take the test I was more that a little concerned at my mental capacity to control both hands simultaneously. I was sufficiently uncoordinated for it to have been a challenge to tie my own shoelaces but after trying to control two dots travelling up a curved line and setting off the ‘out of lane’ buzzer with alarming regularity the doctor/tester told me I’d passed. This despite me already consoling myself to the fact that I’d have to come back when sober and sit the test again. I dread to think how badly someone must have to perform to fail.

In all it took six weeks from deciding to change our licenses to actually getting our new ones in hand but you factor in fuel and parking and photos and ink for the printer, there probably wasn’t much change from €100 each.

Which brings me to the second reason for my annoyance. 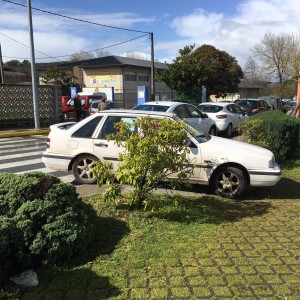 I went to the fruit market in nearby Meira on Sunday morning and while looking for a parking space I witnessed the outrageous attempt at parking in the adjacent photograph. This comes out of the Galicians determination to park as close to where they want to go as is mechanically possible.

There were plenty of legal on-street, free parking spaces within fifty metres of where this numpty abandoned his battered old Volvo but where he chose to leave it blocked a pedestrian crossing AND a path around the edge of the local park.

Now we are used to vehicles being parked on verges, waste ground and double parked with their hazards on while someone goes for a coffee. We’ve even seen cars parked on central reservations and traffic roundabouts and been in a parked car when someone tried to park behind us but decided to use ‘touch’ as their guide rather than their eyes.

But this took the biscuit.

I was at the market for a good half hour and expected to return to find the car towed or at least ticketed but there was nothing.

But now I’m a Spanish licence holder I’ve decided that if it’s good enough for the Spanish, that was the last time that I park considerately, especially if I am in the Santana.

Unless, of course, Amanda is with me…then I’ll park legally! Not to do so would lead to too much earache.

This entry was posted in Local Life, Uncategorized and tagged Bureaucracy, Driving, Parking. Bookmark the permalink.

1 Response to A License to Park Wherever You Like