There had been tremendous rains in the preceeding week, and after finding a large part of the main road from the airport to Ribadeo washed away and replaced by a mud track (down which everything including HGVs were travelling), we decided to call on the house and make sure that we weren’t now buying a pile of rubble. 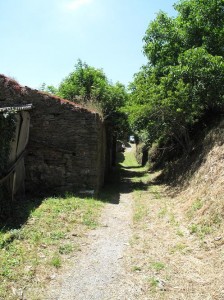 It emerged that his sister had told him that the house would be sold tomorrow and that he had to remove all of his ‘stuff’, a task which he appeared to have left until the very last minute. He asked Amanda about whether he need to dig out his already sprouting potato crop. ‘No, that’s okay, leave them and harvest them when they are ready, we don’t intend to do anything with the land until later in the year.’ There was a tear starting to form in the corner of his eye, it looked like one sentence had lifted a massive weight from his shoulders. He wouldn’t starve this winter.

‘And what about my car, can I leave it in your garage?’, ‘Yes’ replied Amanda. Feeling more confident he went for the third favour, ‘What about my donkey, can I leave him on your land?’. ‘Sure..’, said Amanda, ‘..until later in the year when we start work’. Then the last question, the one that he was obviously really nervous about asking but was the most important to him. ‘At the end of the summer can I cut your grass and take it as hay?’. Result for us! ‘Yes’ said Amanda, trying to hide her delight. For allowing a few small favours we were going to get the land tidied free of charge at the end of the summer.

‘Are you buying this house, we understand you are opening up an old peoples home?’. The Galician chinese whispers had been working overtime. ‘Yes and No’ said Amanda, ‘We buy the house tomorrow, and then we are going to develop it into a rural hotel’. This met with smiles, I am not sure whether they were happy at the prospect of a small hotel in their village or just laughing at us. ‘Very good, that will be perfect’. And then, in this most Catholic of countries, the typical Spanish second (although usually the first) question ‘And do you have children?’.

When we responded in the negative there was a look of pity on their faces, I felt myself being looked up and down as potentially ‘inadequate’, and then Amanda was stared at with pity (at having an inadequate husband). ‘Ah, that’s a shame!’ they said as a couple.

As they pulled away in their old Mercedes with sun dulled red paint neighbour number two approached the property from the other direction, this time with two children in tow. ‘Are you the new owner?’, she asked me (so I was told later by Amanda). My good wife rescued me for the third time in ten minutes. ‘Yes, yes we are’.

‘And do you have children?’ said the woman, ‘No’, Amanda responded. It was a conversation killer and it was at this point that I became concerned that she’d offer us one of hers, or at least organise a village collection to get us one. Childless, I felt almost guilty as she shuffled off two grandchildren in tow, one picking his nose and the other banging two stones together with no particular rhythm.

1 Response to The eve of the big day