The fourth week in November (2009) probably isn’t the time you’d pick to visit your potential new home. The thinking behind it was that; ‘if we like it in November then we’ll like it any time’.

After being delivered safely to Asturias Airport by the orange liveried EasyJet (daily flights in the summer, four times a week in the winter), and after a few minutes to collect a hire car, we were pulling onto a deserted motorway to head out of Asturias and over the Galician border for our first nights stay at Casa do Mudo. Our first taste of Galician hospitality was the warm welcome that we received from Ana, who proudly showed us around her hotel and suggested we took an evening meal at Restaurante A Lonxa in nearby Burela.

Driving around the dock area for some time we were on the verge of giving up when we finally saw a small sign for the restaurant and followed it into the car park for the docks. After parking between refrigerated articulated lorries, and with some trepidation, we climbed the stairs to the where the only noise was coming from, and entered the dock workers canteen. Massive plates of grilled prawns, octopus and clams, and hake were all washed down with local cider and it within eight hours of touching Galician soil it was clear that our decision to house hunt here was not a mistake.

We spent the night going over our criteria for the perfect house for a Casa Rural business; 30 minutes to a beach, 30 minutes to a motorway, 60 minutes to an airport, room for six bedrooms, a separate house/barn for us to live in, land for a small-holding and pool, great views, and off road parking. We weren’t too choosy then, but in reality we expected we may need to make some compromises.

Well rested, and amply breakfasted we headed to a supermarket car park in Viveiro, a really nice little seaside town, to meet with Juan Pablo of Galicia Homes. We, well I, had developed an internet love affair with a rectory (400+ square metres) and it was to be the first property that we’d look at. A twenty minute drive in Juan Pablo’s VW and perched just above a pretty church and cemetery we found the house. 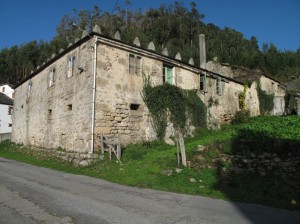 On the market at a paltry 80,000€ (£73,000 at the time) this ‘casona’ was a wake up call. Part of the house was last occupied in the 1970’s with the rest having been abandoned many years previous. The roof was on the verge of collapse, the floors too rotten to bear even the lightest footfall, and the downstairs rooms all full of mud, water and many years of livestock number two’s. 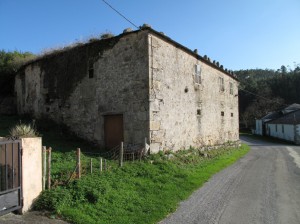 The house was perfect, if we’d had a budget of half a million euros, and after spending an hour exploring Juan Pablo returned us to our car. Excited at the prospects, but daunted by the work, we travelled to Monfero to sample another Casa Rural ‘Monfero Rural’. After a trip to the abandoned monastery at Monfero and the beautiful medieval town of Betanzos we called into Sada (there isn’t much in the link, just like Sada) to get something to eat.

We then learnt the first lesson of Galician cuisine…don’t eat Italian! The restaurant looked nice, and they had a TV with the champions league football on, but the food was dreadful. Never again!

The intermittent light rain that we had experienced so far turned into a downpour by the Wednesday morning. Skipping through puddles we met with Bronwen of K & S Properties, jumped into her 4×4, and set off on an eight hour journey to see a dozen or so houses that she had lined up for us.

The one which sticks in the mind, and caused us to dwell for a while in consideration, was an L-shaped house high on the moors with sensational unobstructed views over valleys and woodland. 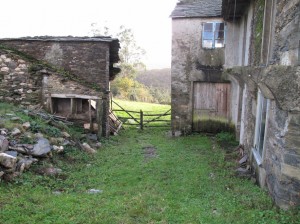 This one was for sale for just over 70,000€ (£64,000) but after much deliberation we decided that it failed to meet too many of our criteria.

Exhausted we made the long haul down to Santiago de Compostela for a couple of days in luxury at the Hotel Monumento San Francisco where we somehow managed to wangle a suite for the price of a double! Santiago is awesome, well worth a visit if you’ve never been. Beautiful streets covered by porticoes, many religious buildings, surrounded by parks and not a chain store in sight. And as for food, truly sensational, especially for lovers of seafood.

We knew we’d not found the right house for us on this trip but we knew we were in the right place and it would just be a matter of keeping the search going. As RyanAir whisked us back to Stansted we planned to come back early in the new year for another look around and probably another plate of percebes, which are truly the taste of Galicia.

4 Responses to Our first visit