The sun was up very early on the morning of the longest day, but not before us. A restless night had followed an evening in the Pulperia with Ramon, and a new client of his Rachel. While Ramon, Amanda and I had feasted on excellent pulpo, calamares and chipirones as well as a great big slice of tuna empanada, poor Rachel (a vegan) had made do with boiled potatoes sprinkled with paprika. Galicia isn’t really the ideal spot for vegetarians, let alone vegans.

A quick coffee, too nervous to eat, and we met with Inma who would hold our hands for the next couple of hours, first stop was to go and see Jesús at the bank to collect the large cheque. A short walk across town and we were arriving at the offices of the notario to await our turn for the official transaction. The Ribadeo notarios office was in what looked like a residential apartment block and once inside we were kept away from the seller but met with Julio and the vendors solicitor.

Last minute negotiations saw Amanda get some changes made to the contract which included one to stop us being responsible for any debts on the property before we bought it and after a short wait we were chaperoned into the smokey office (obviously office smoking laws in Spain don’t apply to Notarios) of the main administrator, radio blaring in the background, contract on the computer screen.

The notarios job is to read the entire contract (a legacy from the illiterate days of Spanish peasants) and ensure that she/he is happy that both parties understand and that nothing looks untoward. Just audible over the radio, she rattled through the contract at speed-reader pace, pausing momentarily to pronounce our English address, causing much mirth. Signatures from the seller and ourselves sealed the deal and we were handed the key to the property, somewhat unexpected as we didn’t think that there was one. 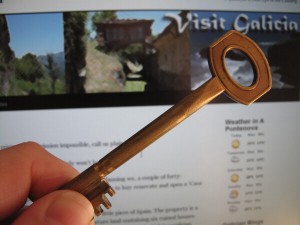 For better or for worse we were now Spanish property owners, on the longest day, in 2010.

We decamped with Inma, Julio, Ramon and Rachel (still in tow with Ramon) to a local cafe for a celebratory coffee and within twenty minutes our new friends had left to go about their business leaving us alone, deed done, to contemplate our next move.

The beaches beckoned (we didn’t know that it was high tide) so after calling at a local supermarket for bread, cheese and fruit we set the satnav for As Catedrals and a celebratory lunch. A granite bench on a windswept cliff top in early summer was where we ended our quest for a new place in Spain and started the long path to renovating our Casa Rural, Trece Liñeiras.

All that remained was to take the thirty minute drive to the house and use our ceremonial key to open the door for the first time. As I turned the key in the stable door, slid the sneck, and pushed it open I looked to my left to where a small hole had been carved into the stone. There sat another identical key, Carlos’s key, we both shrugged our shoulders.

It is the Galician way!

This entry was posted in Background, The House in Liñeiras and tagged 13, Ramon, Trece. Bookmark the permalink.

1 Response to The longest day