The death of Carlos’ donkey is not the end of the tale of livestock at Casa Liñeiras, for now we have a new squatter.

I use ‘we’ in the loosest of terms for the likelihood is that the animal we have actually belongs to Carlos, and its detection caused a bit of a furore.

It has now become tradition when first visiting our pile of Galician stones to check over the inside and outside of the house and make sure that nothing had fallen off, or in, or down, and to ensure that we’ve not gained any additional redundant electrical appliances.

Last week as we approached the property I could see that the top half of the main stable door was open, which was unusual. I entered and went to the fuse box to switch on the power so we could have light. Flipping the switches the 40 watt bulbs flickered to life to be greeted by grunting from deep in the bowels of the house. Alarm bells immediately started to ring.

I shouted to Amanda ‘there’s something in here’ and followed the sounds down into the old animal pens area of the house, with some trepidation. 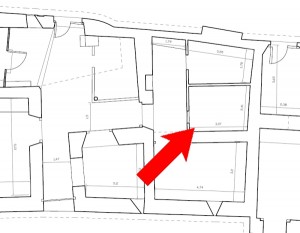 Deep in the Bowels of Casa Liñeiras

As I got closer the noises got louder and then within one of the animal pens I got my first site of our new resident, a big pink pig, who we’ve not named for fear of developing some kind of bond, knowing full well what his fate will be in a few months time.

The pig thought it was food time, and was going crackers, grunting and snorting and trying to jump up to say hello, managing to get his trotters (are they called that when the animal is alive?) about an inch off the floor with each attempt. 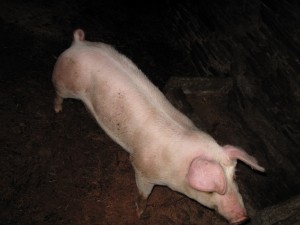 The immediate, and very English, reaction was to find Carlos and insist that he remove his pig from our property, but after calming down for a few minutes we came to the conclusion that he was doing no harm, and that it would cause more problems and bad feeling to get him removed than was to leave him be.

After our discovery we mentioned our lodger to several people we encountered on the rest of the trip. With the exception of our English neighbour David, who was aghast like us, the reaction was a dismissive smile or a giggle. ‘It is the Galician way’.

In any case, we all know where this pig is going to end up, and probably in the not too distant future. Maybe Carlos will thank us for his use of our house with some nice smoked paprika seasoned chorizo. One thing is for sure, ‘Babe’ will not see Christmas.

Dammit, I’ve given him a name!

This entry was posted in The House in Liñeiras and tagged 13, Casa Lineiras, Food, Galicia, Lineiras, Neighbours. Bookmark the permalink.