I’ve broken one of my own rules…in the interests of thrift…but it might have just been worth it.

Travelling to Spain last week we opted for the new Manchester to Bilbao route with EasyJet. We were going for our final (honest) meetings with the two candidate builders in the frame for the Phase I works on the barn conversion. Flights booked I went online and committed the cardinal sin of using a broker to book the hire car. I’d found a great price, upgraded to a category D vehicle as we would be doing about 1,200km in three days, and paid my money, all without really thinking.

Then the confirmation arrived detailing the tortuous instructions which would see us collected by minibus and taken to a local Holiday Inn Express to collect the car. Damn, it was cheap because it ws inconvenient. I’d committed the cardinal sin of not securing the car hire from an outlet in the airport terminal.

Initially the collection seemed to go well and we were picked up promptly and conveyed to the collection point in the blink of an eye. Not so bad I thought, and then the problems started.

There was an American woman already in the process of checking in, and despite the attendants perfect English, it took an age. Twenty minutes later and it was my turn. First they debited by credit card by 95 € as their fuel policy was a previously unheard of; collect full, return empty…now there is a challenge if I ever heard one. They then took 850 € as deposit for damage, before returning my card now looking a little worse for wear. Forty minutes later and I had the paperwork I needed for us to get underway. We then went to the car for the first time.

Determined not to lose my ‘damage deposit’ I noted every scratch and minor ding and went back to the reception, waiting another twenty minutes while the solitary attendent fleeced some other poor unsuspecting souls credit facilities. Once again at the front of the queue he marked and signed for the damage and we were ready, ninety minutes after landing, to get on our way.

Settling into the drivers seat I plugged the pre-programmed satnav, with all our stops for the trip, into the cigarette lighter…..and nothing. A three thousand kilometre, near new car, and the power socket was dead. I stormed bak to reception, waited the now customary twenty minutes, and drew the cars failing to my new ‘friends’ attention.

He shook his head, ‘never buy a Ford’ he said. ‘They’re rubbish…terrible….awful.’ 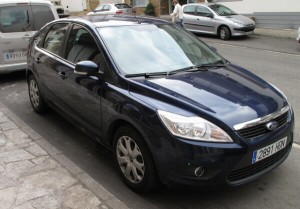 He came to the car and tried it himself, but all to no avail. Sighed, told us to unload our luggage, and went in to start the paperwork all over again, for another car.

Almost bang on two hours after landing, in fading light, and with 300km to drive to our overnight stop, we finally rolled out of the Holiday Inn Express car park and onto the motorway signposted A Coruña.

I said earlier that I liked a challenge, especially with a car which tells you how many kilometres of fuel you have left in the tank, and when I returned it three days later it said zero, no kilometres of fuel left, it was running on fumes and had been for the last ten kilometres. I’d played Russian Roulette with my life (according to Amanda) but was wearing a smug grin as I pulled the car into its space at the hire company reception. I’d had full value for my 95 €, and I was happy.

When I handed over the keys I said ‘It’s very empty’, wearing a big grin. ‘That’s okay’ said the new attendant we’ll fill it and then refund you whatever is left from the 95 € that you didn’t use. I thought she’d had the last laugh. The original attendent, with whom I’d spent two hours in the company of just three days earlier, never mentioned any returned money. I’d risked life and limb, not to mention a couple of appendages that are usually tucked safely in my underpants, to take the car back as empty as was physically possible and they were going to refund me what I didn’t use. I was deflated.

But I’ve had the last laugh…

The paperwork must have got muddled with all the car changing confusion because the hire company just refunded me 86 €. That means that I paid 9 € for a full tank of unleaded, now that is a result! I’ll call it compensation for all my wasted time, and perhaps I’ll use them again after all.