As you’ll know from reading these pages our pressing priority is to appoint a builder and execute the Obras Menores (minor works) license that we were granted back in April 2011 (and which theoretically has to be started within six months). Shhh!

When we visited in late July we met with a new builder, the third that we’d consulted, to get his appraisal of the works and give us a quotation so that we can finally feel happy with the prices that we’ve got, and place the work with someone. We met at the house and spent half an hour discussing the specification for the barn before his attention was drawn to the main house.

‘Mucho trabajo’ (much work) he volunteered. We agreed through animated nods.

We told him that the roof was in a poor state but from the roadside, viewing the north facing roof, he told us that it didn’t look too bad. So for a chuckle we invited him in, cautioned him about the pig in the cellar, and showed him the holes in the south-facing roof which, in times of precipitation, give us an en-suite shower in every room. 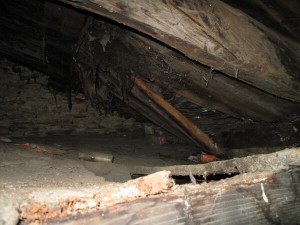 And then I spotted a new problem, one which had been skillfully secreted behind some old wardrobes and masked from me for over a year.

In the areas where the roof had not already commenced its collapse, it was held up by pit props! 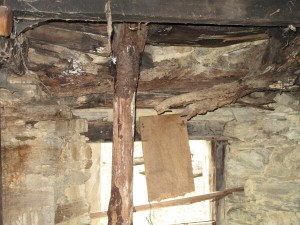 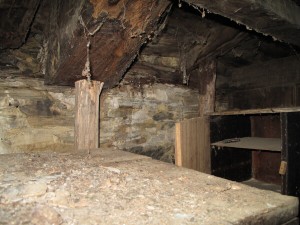 ......and others, hidden behind wardrobes

Our new builder friend took a close look, scratched his head, and then assured us that it wasn’t as bad as it looked, pulling the kind of face a builder pulls when he sees his retirement plans edging ever closer.

Then he pulled a ‘builders ace out of the hat’.

He offered, should he get the work on the barn, to put one of his men on the roof of the main house for a day and repair all of the holes to at least give it another couple of years of being water-tight. And…he wouldn’t charge us! Not bad to say that the last people we approached about repairing the roof (not replacing, just repairing) came up with a ludicrous price for their services.

It’s amazing how little, things like this now phase us. On first spotting our Jenga roof I remember shouting to Amanda, ‘the roof beams are held up with matchsticks’, she shrugged her shoulders and scrunched her nose, then I did the same.

It must be okay then, or we’re past caring!

This entry was posted in The House in Liñeiras and tagged 13, Casa Lineiras, Galicia, Renovation, Trece. Bookmark the permalink.