The alternative route to Galicia – part one

As soon as we heard that EasyJet were opening a new route from Manchester to Bilbao we were determined to give it a try at the first opportunity. So in July we did just that; a short journey to the airport in the UK (rather than the hike to Stansted), someone elses car in Spain, on empty roads, and with now marginally cheaper diesel.

Landing just after seven in the evening, and with almost two further hours passing before we had the keys to our hire car, the journey to Galicia was a race in the gloom, and then darkness, to our overnight stop in Aviles. We did make a quick stop-off at a smashing little restaurant for beautifully cooked hake, but it was simply to get something to eat and drink. As it was we didn’t get to Aviles until well after midnight.

We were determined to make the journey back to Bilbao a more leisurely affair so allowed plenty of time as we set off on the friday morning ahead of our early evening return flight. We’d called at Pantaramundi, in Taramundi, and picked up a sandwich and traditional cod empanada to sustain us on the journey, and armed with water and biscuits and the remnants of our travelling sweets, we hit the motorway.

Making good time we decided to find ourselves a beach to eat our picnic and following local signs, pulled off the autovia at Playa La Franca in Ribadedeva. 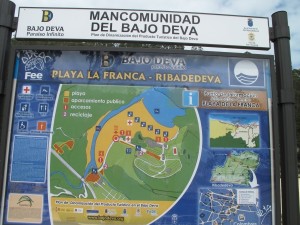 It was a great decision. A beautiful wide beach surrounded by towering cliffs and fantastic clean sand. Parking was free, as it is almost everywhere outside the main Spanish cities, and we found a picnic table at which to consume our provisions. 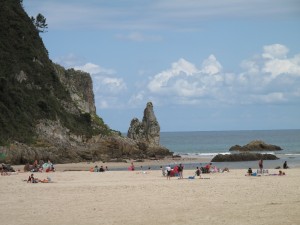 The view was great, perfect to recharge the batteries and rest the right foot (with 170km still to go). 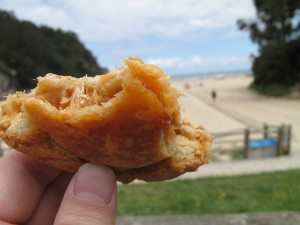 And the empanada was superb.

But this wasn’t our only stopover, and on our second small detour we found an absolute gem – more next time, along with the verdict on the alternative route.

This entry was posted in Local Life and tagged Asturias. Bookmark the permalink.