If I ignore multiple unattended incidents with a white Fiat Panda in and around Teruel in 1989 (another story), then today saw me lose my unblemished Spanish driving record. I’ll come to that in later.

The Landy made it up to the house again but the spluttering is definitely getting worse. I also managed to get the choke stuck half way out so by the time I got there she was running very rich and coming close to drowning in her own petrol. I cleaned the points again, using my fingernail, and hoped she’d be better on the way home.

Today was concrete day, and you could sense the excitement, Facundo was even getting a bit tetchy with his staff. I completed the cleaning of the last secured room in the big house, removed the rotten floorboards and cut a new ‘prop’ to replace the one that had turned to dust as I tapped it with the broom during my cleaning. A quick wander around the estate found an ideal seven-foot long candidate, and ten minutes of ‘tree saw’ later the angles were correct and it was wedged into place, supporting a major beam which through either wall movement or timber shrinkage had ceased to rest on the top of the wall many years ago.

Then the concrete arrived to shouts of ‘hormigón, hormigón’ (it just means concrete). One hundred wheel barrows full later and Pepe, Facundo and Alejandro were re-distributing, agitating and flattening. 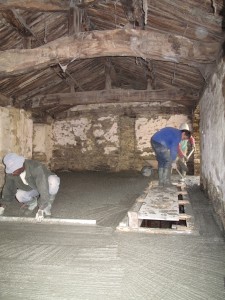 The team finish up the newly installed first floor

We how have an upper floor, the opening out to the balcony has been re-opened, and I’ve met the carpenter (Jose) and agreed on the balcony and even the balustrades. I’ve also agreed that the walls should be raised by another 20cm (I didn’t really have much choice) so that we have a minimum of two metres clearance upstairs. I think I’ve minimised the additional cost by allowing Facundo to take down part of the gable of one of the ruined barn walls and use the stone.

Now, back to the accident.

I decided to pop to the local supermarket, which boasts three aisles of cleaning liquids and just one of food, to stock up on supplies to see me into the weekend (and hopefully to the new car parts). On returning to the Landy there were no vehicles behind and just a small gap in front. In the time it took me to start her up, a young lady in an aged Saxo pulled up so close behind me that when I checked my mirrors prior to reversing I couldn’t see her.

I set off backwards, felt a little more resistance than I expected, and then saw the blue Saxo emerge from the large Landrover blind-spot. I dismounted, for there is no other way to exit a Landrover,  and she emerged from her car to survey the damage.

In these situations you always look at your own car first, and there was not a scratch, blemish, or paint scraping on the old girl. The Saxo had a slightly dented number plate and a little scratch to the plastic bumper. I explained I didn’t speak Spanish, she shrugged her shoulders and said ‘no es nada’ (it’s nothing), got her bag out of her car and went into the supermarket. You have to love this country, in the UK that would have at least ended in a punch-up, and quite possibly required the attendance of the constabulary.

I guess that the problem is that there are not too many other English registered blue Landrover ’90’ with Ifor Williams aluminium backs in Aturias/Galicia. I suspect she’ll be able to find me quite easily if she changes her mind.