The people of the fog

Our corner of Galicia is known throughout Spain as the ‘Land of the people of the fog‘. I know that it doesn’t paint a very good picture of our future home, but today was really the first time in a fortnight that we’ve had anything resembling real fog, and it had burned off by about noon.

Not knowing the local attitude, in this deeply catholic country, to working on a sunday I thought I’d see if my exploits up at the house would draw any disdain or criticism. Although when I got to the house there was still a river running through it after last nights heavy rain, postponing any thoughts of work, it did give me the opportunity to take a few photos of the spectacular localised fog. 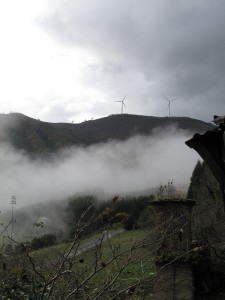 Fog on the Eo 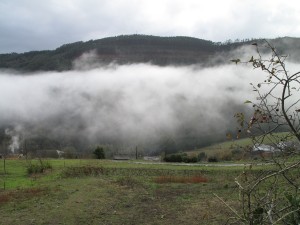 Clear above, and clear below 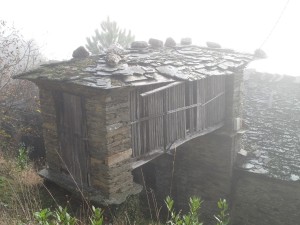 Soon to be restored grain store in the mist

As the fog lifted an earlier muffled sound could be heard more clearly. It seems that the church in Villamea (3km away) is wired for sound. If the congregation won’t go to church, then the church will go to the congregation, at least aurally.

This entry was posted in Local Life and tagged 13, Fog, Galicia, Trece. Bookmark the permalink.