A nice lady from Correos, the Spanish postal service, finally rang my doorbell just after 1pm. She was clutching in her hands my all important parcel of Landrover bits but wasn’t going to give them up without a fight. The last hurdle I had to jump was to present my Spanish National Identity number (NIE), which I don’t have. No number, no packet, she said (in Spanish I understood). I ventured whether my passport would do, she thought for a minute and then agreed to my suggestion.

From the paperwork it appears that they had spent the weekend in Gijon, passed over by the reliable DHL to the unreliable Spanish postal service.

Within hours I was at my new best friend Neils and the replacement parts, costing all of £5, were fitted and she was purring like a kitten all freshly fed and snuggled up to her mother. Thanks were given and time was passed with important talk of septic tanks, heavy machinery and scary forest fires, before it was time to switch to LPG and head off for a test drive.

My morning of solitary confinement in Casa Ramon meant that I’d not seen the house with builders on it for forty-eight hours, I was desperate to put this right and headed for our little bit of hill above Pontenova. 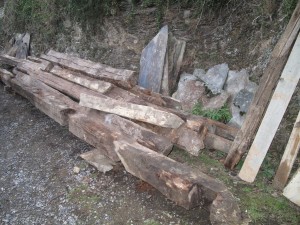 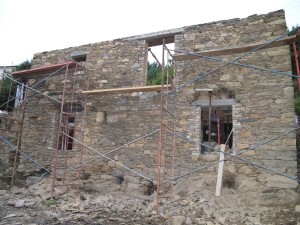 Sky where roof once was

Their were six people working on site, which was transformed, for after 130 years there was now nothing but sky where the roof used to be.

The house was surrounded by broken slates, piles of beams and roof timbers waiting to be evaluated and where salvageable cleaned, and odd shaped stones either waiting to be used for facing, or discarded as of insufficient quality. 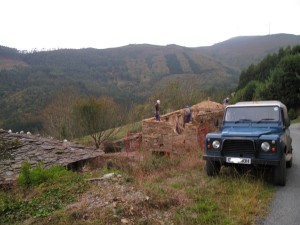 From the road with 'back in favour' Landrover

Facundos’ men were working away like a swarm of ants, even his brother Angel had joined in, trowel and odd shaped stones in hand.

Progress continues to be rapid and I have difficulty in stopping myself standing open-mouthed and staring. Everything is starting to take shape.

This entry was posted in Barn Renovation and tagged 13, Barn, Galicia, Renovation, Trece. Bookmark the permalink.