After just a fortnight in Galicia, I’m getting too used to this life. This morning I awoke at 9:45am, and tried to reconcile myself with the fact that it was only 8:45 in England.

Excepting illness this was the latest that I’ve been in bed since I was a spotty teenager, angry with the world, and ensconced in my bedroom with black walls after a heavy session ‘out down t’town’ with my mates.

The plan for the day was; Ribadeo for a full tank of LPG and then the Eroski supermarket (it’s nothing like as exciting as the name suggests) for supplies to fill my fridge, before spending the afternoon working up at the house.

Tasks one and two accomplished it was time for a leisurely lunch of fresh empanada (basically a Galician pastie which can contain meat, fish, mussels, etc) with an obligatory beer, and then a drive through a brief localised shower in Pontenova to a bone dry Liñeiras.

The plan was to work, but despite showing willing by donning my overalls, steel toed boots and hard hat, I actually spent most of the remaining hours of daylight mesmerised by Facundos’ worker ants busying themselves around the barn. There is nothing like watching craftsmen at work, trying to learn what they are doing in the hope of saving myself a few quid in the future with a bit of ‘do-it-yourself’. 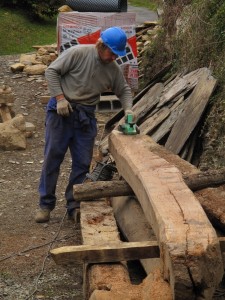 Vladimir making quick work of the old and dirty beams with a hand plane, band-sander and then a tin of light stain and preserver. The wood looks great, nicely aged and gnarled, but fresh. There is little rot,  and the woodworm can only penetrate a few millimetres into rock hard chestnut. 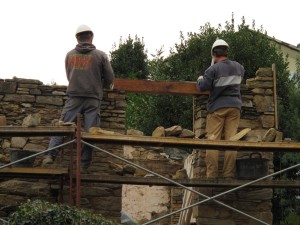 One of the reclaimed and cleaned beams going in

Alejandro and Roman place one of the reclaimed chestnut lintels, about to be covered in the last ten centimetres of stone. 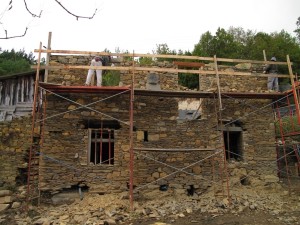 Angel and Pepe are putting the finishing touches to the outside walls on the south facing side of the house. One stone and one chestnut lintels can be seen, chestnut lintels and slate window-sills will be used in the downstairs window openings. 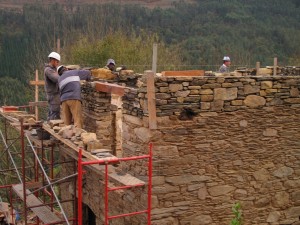 Soon be time for the crown

Once the stone facing is complete, a concrete crown will be poured and re-inforced with steels upon which the roof will rest, hidden from view.

It’s hard work…watching…time for a beer and an early night. Tomorrow I will definitely ‘mostly be working at the house’.