I feel like I’ve put in a full day today, despite arriving after my workmen and leaving just before them. I stayed especially late as Pepe was putting the final touches to the first of two chimneys and I wanted to be around to see the capping stone fitted. 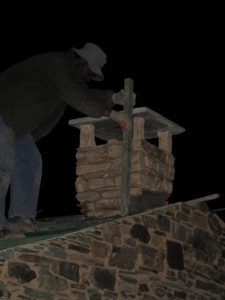 I left around 6:45pm, by which time it was pretty close to dark and the weak street lights of Liñeiras were struggling to excite moths, let alone cast enough light to work by.

I’ve just finished reading the excellent ‘Everything but the Squeal‘ by John Barlow, about his quest to eat all parts of the pig during one year in Galicia. I mention this so as to quote him, and put my as titled ‘near death experience’ in some context.

In his book John observes;

‘Like Mexicans can’t make good wine, and the French can’t be modest, the Galicians can’t drive. Imagine a place populated  entirely by giddy, egocentric children, each one of whom has been given a supercharged tractor for Christmas, without training or guidance.

Galicians often say that the worse drivers in Galicia are from the province of Lugo (where the house is). Broadly speaking this is true, although it’s a bit like Jack the Ripper calling Sweeny Todd a nasty piece of work.’

In the dark I couldn’t tell if the driver was eating, on their phone, half-asleep, or wearing the demented grin of a madman.

I swerved left and at the last minute he swerved right and we missed exchanging front wings by millimetres. The near vertical hundred foot drop to my right was a little too close to comfort, and I didn’t fancy the flimsy barriers chances of stopping three tonnes of Land Rover. Two wheels left the tarmac but I managed to get them back on it pretty quickly. I was too shocked to hit the horn (not where you’d expect it to be on a Landy) or flash my lights, but I did manage a quick swear word.

I’m sure that the white van driver thought nothing of it, and he’ll probably do it again tomorrow night. Me, I’ll be travelling home at a different time, to avoid another encounter.

Talking of near death experiences, I think that after a months of afternoon conversations I have now truly bonded with my next-door-but-one neighbour, Miro. At seventy-five he’s fighting fit despite apparently having a tumour removed last year. Today he showed me his surgery scar… and you don’t just show your surgery scars to anyone!