Phase I complete, back into the waiting game

When I left Galicia back in December, to avoid the wrath of Amanda and make it back in time for Christmas, phase one of the barn conversion was almost complete.

The permission that we’d gained at the end of 2010 only allowed us to complete the structural works and didn’t give us permission to bring in the utilities or do any of the fitting out.

All that therefore remained was the fitting of the five natural slate window sills which I had chosen from the stone masons yard in Mondoñedo. Facundo had promised me that they would be in place by the end of the week in which I’d prematurely abandoned the Landy and headed for the airport. When we went back last week he’d been good to his word and they had been installed leaving the site shrouded in the silence of completion. 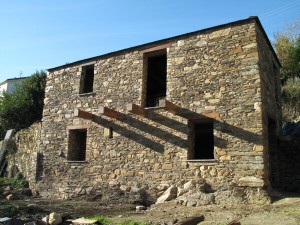 They look even better than I had envisaged when I picked them, and were well worth the 30€ each that they cost (about £24 at today’s exchange rate). Our architect agrees, and after telling us that we should really block the staircase opening up for health and safety reasons, she signed off the works and told us we were fine to pay the builders retention. 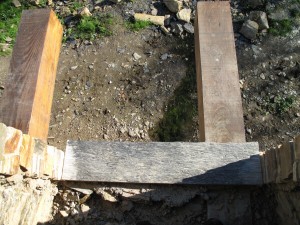 Threshold onto the balcony

We’re now into the long waiting game, waiting for our Obras Mayores permission. We put in the application at the beginning of March 2011 and when the architect called the Xunta last week to check on progress all that they would do is confirm that they had received our request.

That enquiry could mean that we’re back at the bottom of the pile, or it could prompt them into action. In the meantime we are getting quotes for finishing the barn and for making and fitting the doors and windows. This is coupled with plenty of internet research as we try and find (and agree on); a bathroom, a kitchen, a wood burner, and flooring.

The delay is frustrating. All we want to do is bring an old dilapidated building back into use before it falls down. We’ve restored the barn sympathetically, used traditional methods and expensive materials but this seems to count for nothing when the slimy tentacles of bureaucracy take hold.