I’m feeling very homesick, not for the Pennine hills, but for our little piece of Galicia.

I keep getting reports of what is happening ‘back home’ and it makes me wish I was there, breathing in the clean air, eating the great food, and taking in the fantastic views. But I know I’ve got to wait for at least three months.

Our friend Dolores has two new kittens (I’m a real softie for kittens) which look very playful in the photographs. Stephen and Kay’s barn is almost finished and they are taking bookings from the middle of this October for a very reasonable full week price of €500, or €85 a night for short breaks. And the temperatures have been setting local records in excess of thirty-five degrees, when we’ve got more chance of going rusty than sun-tanned.

There have also been some developments over the last week at Casa Liñeiras.

The architect, who cannot be named, has prepared the detailed plans for the interior of the barn including water and electricity schema. What we didn’t realise is that our brilliant new idea to put the kitchen sink in front of the kitchen window has necessitated the plans to be re-submitted to Patrimonio. Hopefully this won’t take long to come back with a positive outcome, and to be honest if it’s not through when the builders start-date arrives, then we’ll be getting on with it anyway.

One physical change that has happened is the installation of gutters at the barn, after the architect urged us to get them put up due to the water cascading off the roof taking the varnish off the balcony. 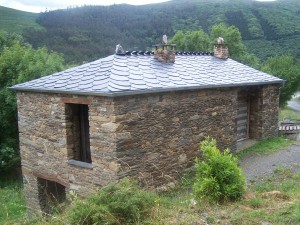 The barn with new zinc guttering

We discussed the options with Facundo last time we were at the house and despite us both preferring traditional copper, we opted for zinc. This was partly due to zinc being half the cost of copper, but also out of concern that the copper could be too much of a temptation to a passing casual thief. This has now set the standard for the big house, which will also be finished in zinc to match. 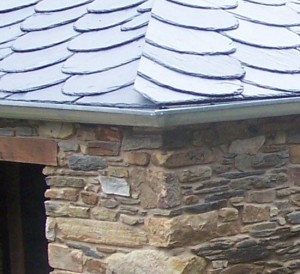 Workmanship looks good from this distance

The work was completed last week and Facundo sent through these photographs today and from afar, and through the lens of a camera, it looks pretty impressive. I’m slighly concerned where the fall pipes discharge to, but with the drains being put in properly in October/November they surely can’t do too much damage?

Guttered, and at the same time gutted that I’m not there.