The first news is that there is no news. We are waiting for a start date from the builder to complete the works on the barn, while Amanda decides on kitchens, appliances and decor. Once we have a date then I can start making plans to spend some time out there, supervising works, shifting some of the weight I’ve put back on since returning home in December, and generally having a good time.

While we wait to get out of the doldrums we are keeping up to date with all things Spain, which are almost inevitably always related to either ‘the crisis’, the weather, or both in the same story.

Today my attention was drawn to a great story about the mayor of a small village about 110km north of Malaga named Marinaleda. It appears that he’s becoming something of a local, if not national, folk hero after staging a number of robberies of local supermarket and giving the ‘fruits’, literally, of his labours to those suffering financial hardship. 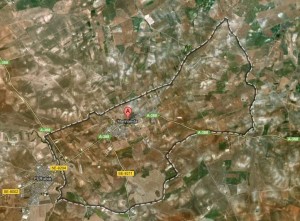 Juan Manuel Sanchez Gordillo, mayor over a population of 2,645, has told the media that the food stolen was distributed amongst the families in his area hardest hit by the Spanish economic crisis.

Seven people have been arrested for taking part in two raids which saw them fleeing supermarkets with trolleys piled high with food, and without handing over a single euro in payment. Mr Sanchez, immune from prosecution as an elected member of Andalucia’s regional parliament, stood outside and ‘supervised’.

Media coverage has made Gordillo, mayor of Marinaleda for 30 years, a national celebrity and he aims to capitalise on a wave of support by marching across the region to highlight issues of unemployment and urge his mayor colleagues in other towns to default on loan payments, stop lay-offs, cease evictions and refuse to accept budget cuts.

I can’t imagine the same thing happening here in the UK. Boris Johnson wheeling a stolen supermarket trolley out of his local Waitrose and distributing it to the homeless under the Kings Cross arches. Somehow I don’t think so.

This entry was posted in Local Life and tagged Food. Bookmark the permalink.