It’s a while since I’ve done a list and today it feels right to do so for it has been quite a frustrating day.

I was awoken by the shrill tones of my Spanish mobile phone, for which I have still to find the volume adjustment, at the unearthly hour of 8:05. It was Facundo, with some problem regarding the bathroom tiles I’ve ordered, but at such an ungodly hour and still wiping the sleep from my eyes, I was at a loss as to what. We agreed to meet at the building supplies place an hour hence. But he didn’t show, even after I waited for the best part of an hour past our scheduled rendezvous.

I then went to site to find it deserted except for a few upturned wheelbarrows so I did what you should always do in such a situation, I tried to salvage the day by going to buy some wood from the timber merchant for whom Neil had kindly e-mailed me the co-ordinates. 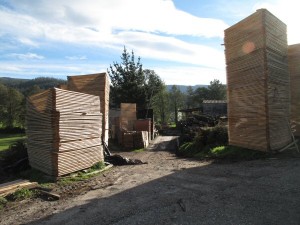 I followed the satellite navigation instructions and drove past an immaculately clean lumber yard with the system still telling me that I had three kilometres to drive.

Then, exactly where Neil had said it would be, was a ramshackle merchants with cut, and uncut, wood wherever they could squeeze it, knee deep mud, and not even a simple doff of  the cap to health a safety. What a brilliant place!

I found the boss, Jose, explained my requirements and placed my order. When I asked if I should pay now or on collection he looked at me like I had gone mad (which I interpreted as ‘on collection’), before helping me plot a safe route through the mud back to my car (which I’d sensibly left by the roadside).

Hopefully, tomorrow will be a day of work. After bumping into Angel at the house at 5:30 tonight he assures me that they will be there tomorrow, mob-handed.