How to make your bathroom a tiny bit bigger

Last year, when we were doing the initial works on the barn, one of Facundos’ men was the singularly most miserable person that I’d come across in Galicia. Roma, a migrant worker from the Ukraine, was always leaden-faced, uncommunicative and on occasions downright intimidating.

He was back on site today for the first time, preparing cement for the walls in anticipation of the impending plastering and while he looks the same, he appears to have undergone a personality transplant. He was chatty, friendly, happy and after lunch even broke into ‘a capella’ singing about his work, life and drinking beer. In Spanish. 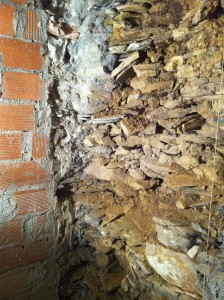 I had a meeting with the builder and plumber this morning. The latter a man so slender that I expect he could pass through one of his 15mm diameter plastic ‘tubos’ without touching the sides.

He will be ideal for getting into the smallest corners of the bathroom.

While he was with us he pointed out that there might be a problem with the smallest room in the house, in that it isn’t square. This means that the shower, which can only be mounted on the out-of-square wall, will be angled into the bathroom.

Facundos’s solution was typically industrial. Demolish some of the wall where the shower will be installed and make it square to the rest of the room. This is what Alessandro, a native of Romania, has spent the rest of the day doing.

It was tough work, and he didn’t join Roma in the singing.

I’m now sat in the dark in Ramons’ flat as during our many conversations this afternoon I let it slip to Roma that I like the odd drop of Rum (Ron in Spanish) and that I’d found a very nice little tipple at the Lidl in Ribadeo for 4.99 Euros a bottle. He promptly invited himself to a party at mine.

Mercifully I didn’t go into any details as to exactly where in Taramundi I am ensconced.