Although you are surrounded by beautiful countryside in both places, it is often easy to forget that life in Galicia and Asturias is somewhat different to that in the Pennines, however rural we may think we are in Holmfirth.

I’ve had three stark reminders in the last couple of days about the nature of agrarian and hunter living.

Yesterday I went to the coast, near Rinlo, to get some treatment for the wood I have bought which will soon comprise the floor of the cabazo. This treatment smells like nail-varnish remover (pear drops) and it is very pleasant for the first few minutes, but after painting it for a couple of hours the novelty wears off and a feeling of mild intoxication takes over.

It costs 42 Euros for five litres and is intended to keep the woodworm and other wood loving creepy crawlies at bay for twenty years. Liberal application with an oversize paintbrush, the only one I had with me, saw plenty of the solution elsewhere than on the wood with a great deal of it landing on me. I suspect that my eyes won’t be getting any nasty infestations for twenty years. 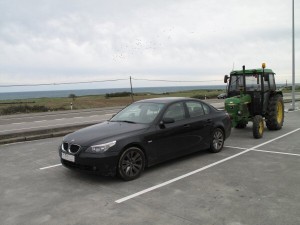 I found what I needed in a most bizarre shop, as recommended by Neil, which was one third agricultural wholesaler, one third DIY centre, and one third supermarket.

I emerged with solution (Corpol Metacarcoma) and 3kg of 70mm galvanised nails to find that the most agrarian form of transport, the tractor, was behind me in the parking lot.

Deciding to make full use of my last Sunday before a two week trip home I set off for the house just after nine. A couple of miles from Taramundi, in a small village called Mousende, the locals had just slaughtered a pig by the roadside and were burning off its stubble with a blowtorch. Not a typical Sunday morning sight in Holmfirth. 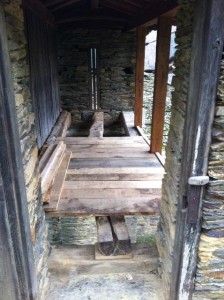 When I finally got started on the cabazo, admittedly making a bit of a noise banging 70mm galvanised nails through rock-hard chestnut, I was visited by a stranger. Although he spoke mostly in Gallego I think I was being reprimanded for working on a Sunday as a couple of words I did pick out were domingo (Sunday) and Iglesia (church).

Perhaps it was the ‘God police’ trying to dissuade me from working on the holy day, or perhaps he was just a nosey neighbour. I was pleasant enough, smiled a lot, and he seemed to like my cabazo. Once he got back in his car and drove off, I carried on my hammering.

Finally, on returning back to Taramundi mid-afternoon I was confronted by one of the local pub landlords running down the street carrying a shotgun. In England I would have been running as fast as I could in the other direction, but here it’s pretty much the norm and it appeared that a boar hunting party had just got back after an early morning start.

It is very, very different here. But I do love it…although I could have done without seeing the dead pig.