Home for the holidays

My week long silence has been due to me being back in the frozen north (of England) as I decided to take advantage of the Spanish public holidays and have a couple of weeks back home, rather than twiddling my thumbs in Galicia.

December 6th is the Day of the Constitution and the 8th is the Feast of the Immaculate Conception. With the 6th falling on a Thursday, then the Friday is accepted as a ‘Puente’ (bridge to the weekend) with many public offices closing. As the 8th is a Saturday then the public holiday gets bumped to the following Monday, meaning that many Spaniards will have a five day break, at an ideal time to get the Christmas shopping done.

This year, however, is a less than satisfactory combination for the Spanish. They love it when the 6th is a Tuesday and the 8th a Thursday as this gives them a ‘puente’ on the Monday and Friday, a chance to throw a ‘sickie’ on the Wednesday for a nice nine day break. 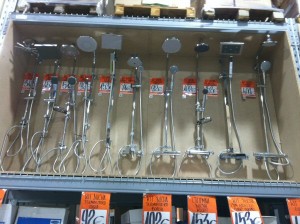 On the way to the airport for the flight home Neil was kind enough to treat me to a tour of the DIY stores of Oviedo, one of the lesser trod tourists pilgrimages. We managed four stores within a couple of hours, while keeping our fingers crossed that a re-seated radiator expansion tank seal would avoid Neils’ car overheating again like it had on the road from Taramundi to Aviles earlier in the morning.

I spotted plenty to spend our money on. A nice Grohe double shower, with thermostatic control, for €200 less than I’d seen it elsewhere, a very cheap looking Husqvarna chainsaw, and some stainless steel double-skinned flue pipes for the wood burner. 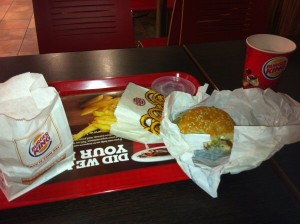 We made the airport in good time, I consumed my last decent coffee for a fortnight, and the flight was on-time and without incident.

But then I seriously disgraced myself!

The plane landed just after 3pm (4pm CET) and I was starving. It was freezing and I fancied some warm food. My only option was Burger King.

In a moment of weakness I ordered a fish burger, fries and fizzy pop. It took just one bite to regret it and remember why I’d not been in any fast food joint for the last twenty plus years.

It will be at least another twenty before I make the mistake again. 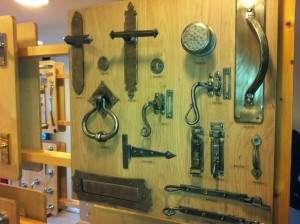 I’ve not wasted my time in the UK. I’ve bought some door handles for the, as yet non-existent, internal doors, researched integrated ‘electrodomesticos’ (white goods) for the kitchen, and agreed to three more quotes for additional works (uprated electrical installation, the building of an outside housing for the water heater and a wood store, and more expensive flooring materials for the kitchen and living room).

I’m back to Spain early next tuesday morning, and Neil is collecting me from the airport and kindly taking me back to some of those DIY stores so that I can get the shower, and invest in my second (I bought an angle grinder last year) Spanish’ big boys toy’, a chain saw!

This entry was posted in Local Life and tagged Food, Oviedo, Renovation, Roads. Bookmark the permalink.