The magical date of the 12th December 2012 (12/12/12) was the day that I caught a horrendous cold, perfectly timed to coincide with the yuletide festivities.

As yet, there are no visible portends of the snuffling hell that lies ahead, but after spending an hour this morning in close vehicular confines with a sneezing and wheezing Facundo (our builder), it is a certainty that it will shortly be manifesting itself in the region of my ears, nose and throat.

I got back to Spain yesterday and it was almost as though I’d not been away for a fortnight. Despite little external change the house now has first fix electrics which comprises the carcasses for the sockets and switches along with several tens of metres of plastic tubing embedded in the soon to be plastered walls. 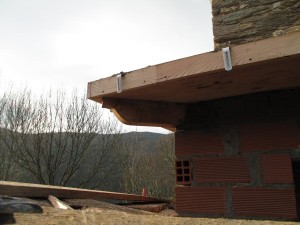 The other advancement is the porch which now has a roof, beautiful internal beams, and when I left to come home for my lunch, was starting to get its slates. We’ve ignored the architects plans for a single pitch and elected to build with three, and I am sure that it looks a lot better than it would have done. It’s a slightly larger roof area, and therefore slightly more expensive, but even half-done it looks great. 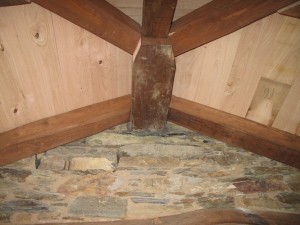 The trip with Facundo was to Meira to look at some floor tiles for the kitchen, after I rejected the first option, which looked like something you’d have found in a 1970’s swimming pool changing room, out of hand. These were much better, and I’ve agreed to their purchase. 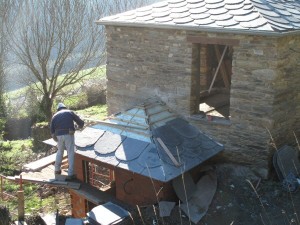 The doors and windows, which I thought were scheduled for delivery yesterday, have not arrived and after a quick phone call it was established that we’d get them sometime ‘this year’. Not very confidence-inspiring. I am going to go up to the carpenters in La Roda in the morning and see exactly where they are up to, and indeed whether they have actually started to construct them. I’m not entirely sure that I believe their assurances that they just need staining and varnishing.

I turned down the option of free Christmas draw in the supermarket at lunchtime. All I had to do was leave my phone number on my receipt to be entered into the competition where the first prize is a pig. I didn’t enquire as to whether it was alive or dead as being a pescetarian who lives for most of the year in England, neither answer would have appealed.

Being a generous type I thought that I might as well share Facundos cold. So this afternoon I will begin preparation of the magnificent piece of chestnut, which I bought last visit, and will be used in the bathroom. This means decamping to Neils and taking full advantage of his hospitality by abusing his myriad of big boys woodworking toys (circular saw, electric plane and band sander). My Tung Oil arrived at Neils via mail order from Germany, of all places, although I had originally bought it from a company in Madrid.