The more time I spend in Spain the more I convince myself that it is a country which operates in a different temporal paradigm to the United Kingdom.

There are still nominally sixty seconds in a standard minute, sixty minutes in a standard hour and twenty-four hours in a standard day, but they seem to disappear at a far faster rate than they do at home. It seems that time is in some way accelerated, you look at your watch and it is 10am and what feels like a couple of hours later is actually seven or eight in the evening. It is simply bizarre.

Let me try and explain.

We arrived in Spain on Monday 29th April and left on the 4th May, five and a half days in total, but it felt like we were there for no more than two or three days at a maximum. In that time we only completed a fraction of the work that we had planned for the trip, despite the aborted kitchen and doors fitting which you might have thought would have left us kicking our heels.

Each day seemed to pass on turbo time, so much so that on occasions I did consider whether I was losing large chunks of the day suffering from bouts of narcolepsy. No sooner had the alarm gone off in a morning than it seemed to be time to think about making plans for an evening meal.

Stopping on the coast at 1pm to eat a bit of empanada and an apple, turns into deciding that as it is already 4pm, we really ought to be making tracks back to the house to start the days work that we had planned. 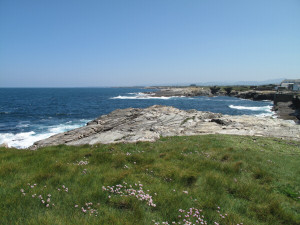 Amanda and I have started calling it Spanish time. Not simply an hour in advance of UK time, but a time which moves faster, despite an apparently more relaxed pace of life.

Being profound for a second (as profound as I can muster), I am sure that time seems to pass faster as a symptom of age. When I was a youngster the six week school summer holiday seemed to stretch on forever, I believe because six weeks was still a big chunk of a ten year olds entire life on the planet to that point. Now, hurtling towards middle-age, six weeks is a far smaller percentage of my total life and seems to pass relatively much more quickly. But this doesn’t go any distance to explaining why time moves faster in Spain than here.

It must be something to do with the lifestyle.

In Spain we don’t rush, we take our time. We stop and take in our surroundings and nature; the bird song and the babble of the brook;  impromptu chats with neighbours and time spent trying to describe an item to a shopkeeper with actions once my limited vocabulary has been exhausted. Perhaps we’re being hypnotised!

It is a worry, I don’t want time to pass so quickly when I am Spain, just when I am in the UK between trips.

This entry was posted in Local Life and tagged Asturias, Barn, Galicia. Bookmark the permalink.