What Galician food lacks in finesse, it usually makes up for in taste, and often quantity.

Our last trip presented some opportunities for great food and as always we grasped them with both hands and made proverbial ‘pigs’ of ourselves.

The first opportunity came at the trout festival in A Pontenova on the fiesta Wednesday when after we’d witnessed the weigh in we bumped into our neighbours (the Madrilenos) who suggested that we sample the trout fayre and a beer at the makeshift but massive festival bar/restaurant. 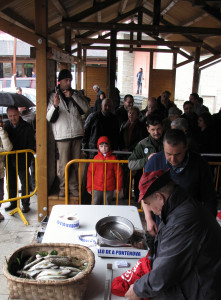 I’m not a massive fan of trout as it is usually a bit ‘muddy’ but this was nothing short of sensational, nothing like the trout I’ve had in the UK. Absolutely delicious; simply gutted and thrown in the deep fat fryer until crispy. 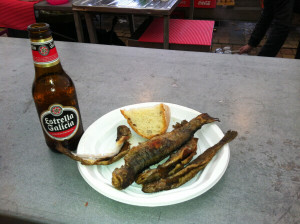 Wash them down with a beer and a pidgin Spanish conversation about music with my new friend Oscar and the simplest possible meal becomes a memorable experience, the very fabric of Spanish life.

The following day we went to the big shopping centre at Lugo to search for items off an increasingly long list of requirements for the house, mostly without success. To break up the day we grabbed a quick snack at a new restaurant which has opened up where a fusty old bar used to be, and chose from their special menu which allows you to select three savoury dishes which are served on a round plate divided into sections (two quarters and a half).

As a concept I am not sure it works, but it seemed very popular with the local shoppers. What did work very well was the ‘Calamares Negro’ dish (black squid) which I ordered and which, while most unappealing on the plate, was delicious. The other two offerings didn’t fare quite so well but if I ever see this on a menu elsewhere I will choose it, despite ‘black’ usually being the antithesis of good food. 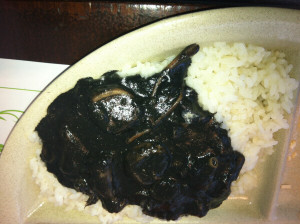 That night we met with Stephen and Kay and two friends from England, Tony (who just as Stephen had previously warned is as mad as a box of frogs) and Anne (known as ‘the long suffering Anne’), and we went back to a favourite little back-street restaurant in Vegadeo. Here we had half a dozen brilliant tapas between us, all washed down with great local beer/wine. I was enjoying the food and the company so much that I forgot to take any photos.

The final night in Galicia saw us hunting for a restaurant with Neil and Rosa and after we’d found the previously recommended one closed, we ended up in Meira and wandered into a blacked out restaurant next to the park in the centre of town. The bar was open but despite it being after 10pm we were a little early for the restaurant. They switched on the lights and brought a beer and the menus.

The prices were cheap, even by Galicia’s usually cheap standards, but the food was again great.

I ordered Merluza à la Gallega which was fresh, succulent, plentiful and tasty for €7 (about £5.50). 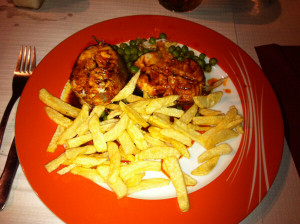 But the dish of the day, for carnivores at least was Neils’ chuletón de buey (Ox Steak) which was ridiculously enormous, about two inches thick and served with fries and pimientos de padron. 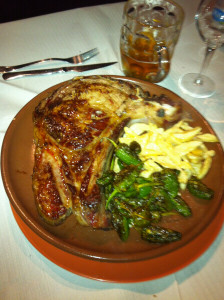 It took him twice as long as the rest of us to strip all the meat from his bovine beast, break into a sweat, and call for beer re-enforcements to assist him to completion. All that for just €12 (about £10).

With all these great meals there was never room for desert.

This entry was posted in Food & Drink and tagged Food, Galicia, lugo, Meira. Bookmark the permalink.