And on the fourth day…

The kitchen was finally fitted on the fourth day, the fitter was not joking when he said that two days wouldn’t be enough to fit eight metres in length, although I did unpack and push the fridge-freezer into position myself saving him 65 linear centimetres worth of work.

The fitter was from Ferrol, about a two hour drive from the barn, and called Abel. When I pointed out that his name was just one consonant away from the name of our IKEA kitchen units (Adel) he didn’t find it as amusing as I did, but then it probably wasn’t the first time that he’d heard it.

Despite our original ‘frosty’ encounter a couple of months earlier, when he’d refused to work due to one of the walls not being straight, we soon warmed to each other and before I knew it he was sending me on regular trips to the local ferreteria (hardware) and fontaneria (plumbing) for all the bits he didn’t have, and which I then had to buy.

On one occasion it took three trips to get the correct hose to connect the taps to the pre-existing outlets, despite being told that there is only one possible type I could buy. Plumbing in Ferrol must be different to that in A Pontenova.

We even shared lunchtimes sat in the partial shade under the roof of our new wood store, chatting in Spanish about the usual subjects; Spanish life, the crisis, social security, his family, and the cost of fuel. Although I offered water, coffee, fruit, crisps and even sandwiches, he always declined, perhaps fearing that my kindness was in fact an attempt to poison him for his past obstinacy.

I’d rather that someone takes their time and does the job right, and there is no denying that Abel did just that because at the end of the fourth day I signed his paperwork to tell of my satisfaction, and he left me with a wave and a lovely new kitchen, and my front door key! 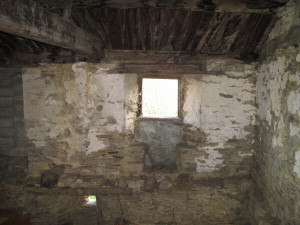 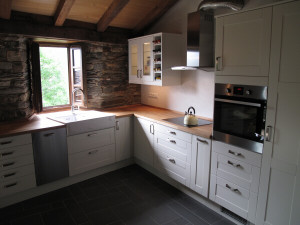 I’m very impressed, especially for the price and the 25 year guarantee. It looks like a kitchen that cost double what we spent and from keeping my beady eye on Abel I can assure you that it is very well put together.

I’ve now furnished the new units with my hob kettle (brought from England), a cheap set of bendy knives and forks, some plastic cups, a free mug that I was given last Christmas by the nice lady check-out operator at Eroski, two tea towels, and half a bottle of washing up liquid. I could move in.

But, Amanda is already planning a massive spend then next time we visit in July, a trip which once concluded could see the best equipped kitchen in Galicia.

1 Response to And on the fourth day…