I know that I run the risk of being called a Spain snob, but I have never had any desire to visit to Costas, the Balearics, or even the Canaries. I’ve seen them on the telly with their sun reddened Englishmen in vest tops and baseball caps eating fish & chips and drinking lager in Lineker’s Bar before throwing it back up in the street. These places have absolutely no appeal for me.

When my in-laws rang a few months ago to say that the whole family were booking a week in Benidorm to celebrate my father-in-laws 65th birthday I broke into a cold sweat, a sweat of panic and fear. Much as I love my in-laws, surely they didn’t expect me, connoisseur of the Spain of; empty roads, rolling hills, forested mountains and good food, to go to the Mecca of all things that ‘Sun’ readers hold dear.

I put my foot down and said ‘No Way’!

Over the last few months there had been multiple attempts to change my mind. Half-hearted appeals from Amanda (who also wasn’t that keen), attempted blackmail by my young nephews, and ‘it would have been nice if you could have come’ speeches from my father-in-law, but I held firm.

I’m still not quite sure how it happened but three weeks ago Amanda booked us on the RyanAir flight from Manchester to Alicante and found us a reasonable looking four-star hotel just outside Benidorm for a reasonable sum. I still don’t remember agreeing to go, but at 3am last Wednesday I found myself on the way to Manchester airport for the 6:30am flight, half feeling like I was being kidnapped. The only thing I was looking forward to was the surprise on their faces when we showed up unannounced.

By God it was hot.

We arrived into temperatures in the late thirties, speeded through passport control like well-travelled professionals with just our hand baggage, and were on the transfer coach within minutes of landing. Here where we sat for just over an hour as family after family of England shirted English and Manchester United shirted Irish struggled with their oversized and multi-coloured luggage to the adjacent smoking area for a last fag before the forty-five minute transfer. Bulging at the seams, we set off for the skyscrapers and nightclubs of Europe’s biggest tourist resort.

After three circuits of Benidorm, and two and a half hours on board, we were finally dropped at our hotel, which was a pleasant surprise. It was almost empty, away from the skyscrapers, had large rooms and a rooftop pool, and pretty good air conditioning.

The surprise was getting closer. We’d texted Amandas sister and brother to ask ‘How are you? What are you doing today? How is the weather?’ as if we didn’t know it was bloody hot. Neither had responded giving us no idea whether they were at their hotel or not. We did what every quasi-Spaniard should do in such a situation….we went for lunch. It felt like the last supper.

Four courses and nine euros later, as the temperature pushed through the forty-degree mark, and we walked up the road to the in-laws hotel, sneaked through reception, found Amanda’s parents by the pool and sprung the surprise.

The beer flowed, comparisons of journeys made, and lunch discussed. I was itching to get out of the stifling temperatures and take advantage of the hotel pool. 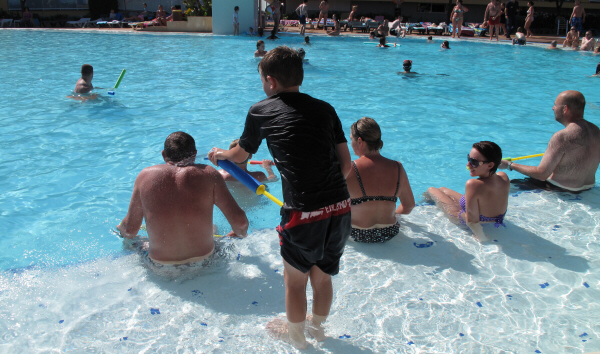 We’d been in the pool for about thirty minutes, fighting on an every-man-for-himself basis with my nephews water pistols, when the shout came up from the far end of the pool….’brown shark’.

All heads turned towards the incident as the lifeguards blew their whistles and went running for their fishing nets. Word quickly spread as the pool emptied, someone had committed the ultimate faux pas and poo’d in the pool.

The pool was quickly surrounded with police tape, filled with chlorine, and put ‘out of bounds’ for the rest of the day.

Within six hours of landing Benidorm was living up to my expectations. You couldn’t make it up.

This entry was posted in Local Life and tagged Benidorm. Bookmark the permalink.