But what is actually for sale?

Our Immaculate gestoria was in place but there was one thing missing, a traditionally English thing but something that the Spanish couldn’t care less about, a full survey. We explained to Inma that we’d really like answers to a few questions;

Inma humoured us and found us a local surveyor in Ribadeo who was contracted and sent to the house armed with theodolite and tape measure. Within a couple of days his report, for want of a better description, arrived with three pages of text (in Spanish), lots of photographs of the house in the sunshine (which was nice because we’d only really seen it in the rain), and a nice plan (see below) showing the extent of the land that comprised the titles on the market. 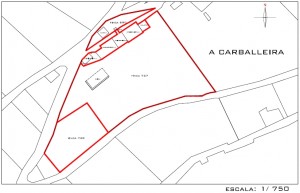 Amanda dedicated her time to the text, while I looked at the pretty pictures and the plan. I knew that there was something ‘interesting’ on the way when after thirty minutes of consulting the online Spanish dictionary  her preamble consisted of ‘Right then…’. For this is one of Amandas ‘I’m being serious’ phrases.

Basically, and without too much embellishment, she told me that the surveyors report said that the house needs a new roof, new internal floors, new doors and windows, sanitation, water, electricity, the ruined houses are overgrown, but on the whole it was fairly sound.

There were ‘no flies on this surveyor’.

I consoled myself with the fact that my 550€ had bought us some sunny house photographs and site plan. At the end of the day the words were only for Amanda anyway.

Now I know why the Spanish don’t bother with a survey!

1 Response to But what is actually for sale?