How does your garden grow

We’ve only been in Galicia from November to June, so we’ve not had chance to view the state, area or property when nature has fully taken hold and the sunshine and occasional abundant rain have worked their magic. It’s now two whole months (and seems longer) since we completed on the house and I image that the last sixty days will have seen a massive change.

Following the Life in Galicia blogsite my curiosity was further enhanced by their article ‘It’s summer because…’ due to the fabulous looking fruit and veg, not to mention the ‘frog shower’ water feature. These ‘Expats’ are in Sober which is about 150km from our house and due south-west with us both being about equidistant from Lugo. Whilst the climate is warmer and more humid at their house than it is closer to the north coast, it still gives us a good example of what we may be able to expect to grow with some success. Tomato, grape, apple, walnut, olive, a whole host of salad stuff and root vegetable, squash, pulses and legumes.

At the moment our land has some salad vegetables and potatoes growing on it, thanks to our friend Carlos (more of whom later). We also have a number of fruit trees, most of them sadly self-seeded in the most unfortunate of places for our impending development. Hopefully we’ll get a crop or two from them before they have to go, but to recompense we intend to plant a small orchard to at least keep ourselves self-sustained in apples, cherries, limes and lemons, kiwi (which is a big industry in Galicia), and possibly olives and walnuts.

On the last trip in June I snapped the following. If anyone can help with identification then please feel free to comment; 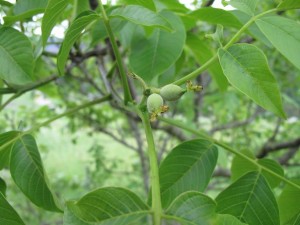 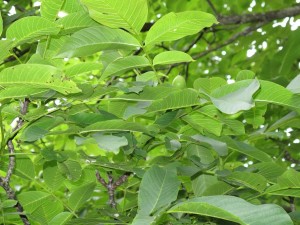 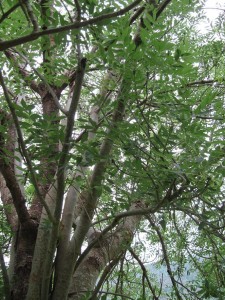 What I did recognise were; apple (at least two varieties), walnut, olive, cherry, almond and the most interesting of all….a fig tree. 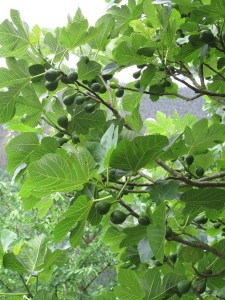 Apparently the ones to eat are the ones covered in ants…for they are the sweetest and ripest.

This entry was posted in Nature, Places to Visit and tagged Food, Fruit, Galicia, Lineiras. Bookmark the permalink.

4 Responses to How does your garden grow