This is probably, and hopefully, our last ever British Christmas. 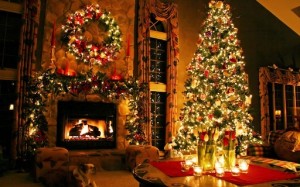 This time next year my racing imagination has us warm and cosy by the wood-burner, a locally cut Christmas tree decorated within an inch of its life, and friends popping in for Christmassy treats,  with plenty of alcohol and good conversation.

By then the big house will be a building site with progress being made towards the establishment of the self-catering apartments and all will be well with the world.

Spanish Christmas is very different to British Christmas. It is less materialistic, more family oriented, less commercial, and a little bit warmer, and less rushed. Nothing much happens on the 25th December as the big party is ‘Día de los Reyes’ (Day of the Kings) on the 6th January when children are gifted a small number of presents.

Call me a ‘bah, humbug’ if you want, but I think I fell out of love with the British Christmas when I was in my early teens.

2013 is hopefully the last time that we will be subject to the overt consumerism which makes me weep more than feel Christmas cheer, where people feel obliged to buy bigger and better presents that they can ill afford and then spend the rest of the year trying to pay for, before it all starts again in eleven months’ time. At a time of austerity people should be concentrating on surviving and putting food on their families table, not on buying little Jimmy the latest games console because ‘all his friends have one’.

This is the last year that we’ll be told by the supermarkets what to eat, told by the TV schedulers what to watch, and told by the government how to act.

My only real Christmas tradition is watching the Patrick Stewart version of ‘Scrooge’ always hoping that either I will find enlightenment and embrace Christmas (for I would dearly like to) or alternatively,  just for once, Ebeneezer would be as grumpy and anti-Christmas at the end of the film as he is at the start, thus justifying my own festive grumpiness.  I have it on DVD so it is a tradition which can continue in Spain.

But over time I have found myself mellowing a little.

In religion I’ve slowly made the transition from atheist to agnostic, hoping beyond hope that there is life after death for the ‘too many’ people that I have known, loved and lost, but at the same time knowing that an omnipotent being and beautiful afterlife goes totally against logic and science. In the same way I’d love to be able to have the Christmas spirit and embrace the festivities but in thirty years the sceptic in me just hasn’t allowed it.

Perhaps Spain and Navidad 2014 can be a fresh start for me, away from people’s expectations that I am a grumpy old sod in December, and a chance to spread some festive cheer with a clean slate. I want to enjoy Christmas, I just can’t bring myself to do so.

Next year, as I promise myself every year, I’ll be different.

Oi, Santa, pass me another mince pie will you?

This entry was posted in Local Life and tagged Fiesta. Bookmark the permalink.