I’ve learned more about electrics and cabling over the last weekend than I have in the last forty years. My crash course started early on Saturday morning when the need for toast blew the barns power supply. At the time we were using two lights, the hob extractor, a small electric radiator, the water heater and one of the rings on the induction hob to boil the kettle. I put four slices of toast into our lovely new art deco style toaster, pushed down the sliders, and everything went off.

After the initial shock I made my way to the new fuse box to flip back whatever switch had tripped, but to my consternation they were all good. It seemed that our problem was more serious than it first appeared. 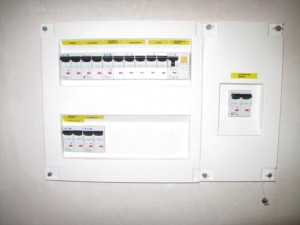 We called the electrician who had installed the whole system in the barn and he asked whether the switches had tripped. When we told him that they were all fine, he said he was on his way. We’d heard that before and settled in for a breakfastless long wait.

Within five minutes his little red van pulled up the road and parked outside the barn. What service! He looked at the circuit board and then asked about the trip switches in the main house. We weren’t aware of trip switches in the big house, so we found the keys and followed him down the path. Sure enough, the switch was tripped, and two seconds later we were back on full power thanking him for his prompt action and breakfast saving expertise.

But my education was just beginning.

In Spain, apparently, you pay a standing charge based on the maximum amount of kilowatts (KW) that are supplied to your property. This is around 1.7 Euros per KW per month. As our big house hadn’t been inhabited since the village was connected to the mains, we were getting the very lowest supply at just over 2 KW, just about enough to run a washing machine.

As soon as we hit our limit then trip switches blew, the desire for a simple continental breakfast had overloaded our system. We had asked the electrician to increase our supply threefold at the time he did the installation, but it must have slipped his mind, or been too difficult, or been delayed in the tangled web of Spanish bureaucracy. He worked some black magic at the main control box and told us that everything should now be alright.

While he was there I asked him to show me where the TV aerial cable emerged in the big house as the main job for this trip was to install a television. He took me to a tube emerging half way down the big house and confidently told me that ‘this is the one’. I committed it to memory, ready for Monday’s pre-arranged aerial implementation with the assistance of my friend Neil (although I knew I’d be the one doing the assisting).

Monday’s implementation started brilliantly. The aerial that I’d purchased was the right one, I’d got enough cable and fittings, and within half an hour the antenna was in position and awaiting its connection to the barn.

The basic difference between the professional (Neil) and ham-fisted amateur (me) is knowledge. On my own I’d have tried feeding the cable through the pipe from the house, and probably got into a horrible mess, but Neil had a set of ‘push rods’. He fed them through the tube as I passed each new length, pointy side up, to be screwed into the end of the ever lengthening plastic snake disappearing into the depths of the house.

When we reached about 15m, Neil hit a dead stop, he grimaced trying to push the rod through its barrier. But the rods were going nowhere. We went back to try from the barn end. This time the push rods went just over a metre before hitting the blockage. It seemed that we’d reached the impass directly under the floor of the beautifully newly tiled porch.

Disappointed, with an unconnected aerial, and visions of having to dig up the floor, we did what every Englishman does in this situation; we retired to the warmth of the kitchen for a cuppa and a nice piece of cake.

I called the electrician again. Over two, short, badly-connected, phone calls before he switched over to his answerphone, I told him that the pipe was blocked and we couldn’t install the aerial. As the first cup of tea became a second, and a third, is was clear that he’d not be so responsive this time.

Ever eager to please, Neil said he had one more thing to try, a very flexible but much shorter push rod that could go round more acutely angled bends. He retrieved it from his car and decided to start at the barn end, quickly threading past the earlier blockage and eventually pushing ten metres of flexible plastic push rod into the pipe.

Then he reached another impasse, so I went looking to see if I could see the emerging probe. It wasn’t where I’d been told by the electrician that it should be, but at the end of the big house closest to the barn I found another tube, with a sealed end. As I rattled it, I could tell there was something inside. I cut the tube and there was the most welcome of sights, the white plastic bobble on the end of the push rod. In the descending gloom we attached the coaxial cable to the push rod, pulled it through the tube, and connected it at both ends.

We had signal, we had a functioning TV, and so we had a couple of beers to celebrate. We’d overcome misinformation, and through sheer dogged determination had snatched victory from the jaws of what had looked like a crushing defeat.

Let’s just hope that our electrician never decides to hang up his multi-meter in favour of a career in gynaecology!