The larger vehicle also gave me the opportunity to collect the pair of bookshelves that I’d had our carpenters in La Roda (about a 45 minute drive from the house) construct from some rudimentary technical drawings sent out a couple of months ago….or so I thought. 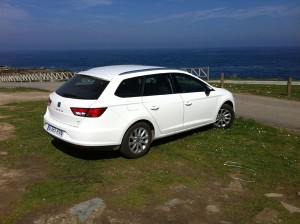 They did look big. Starting to panic I got out my tape measure, an essential piece of permanent Galician pocket kit along with a Taramundi knife and a pair of PU coated black nylon working gloves, and checked against the memorised dimensions. Everything seemed to be in order and I made all of the right ‘thank you, they’re great’ noises and I reached into my wallet to conclude our transaction. 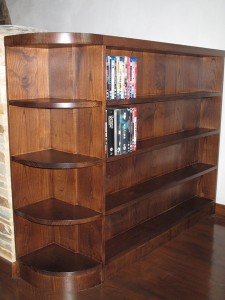 Now, there is customer service, and seemingly there is Carpintero Mendez service. I was so surprised by the offer I immediately did the English thing and said ‘No’ without thinking it through. ‘I have a friend with a bigger car, I will come back later’, hoping that Neil would be answering his phone; willing to lend me his 4×4; and that the 4×4 was actually roadworthy.

I’d forgotten that Neil’s truck did a maximum of 55 km/h so the round trip took just over two and a half hours. The shelving did go in the 4×4, but was a tight squeeze, but was well worth the effort once we got them back to the barn as they look terrific.