One of the big perks of life in rural Galicia is the totally justifiable necessity to own and use a comprehensive range of ‘big boys toys’, not required in suburban Huddersfield. While we are still currently long-distance Gallegos this hasn’t stopped me taking the first plunge into macho world of ‘power tools which can kill you in the blink of an eye’. 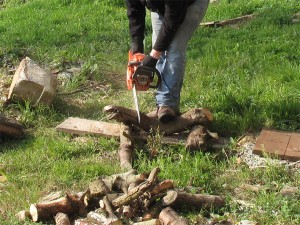 Last year, after extensive research, I bought myself a Husqvarna 236 (it was the cheapest decent quality model on offer) and while it is in the ‘kindergarten’ of the chainsaw world, there is none of your ‘electric’ nonsense on show. This ‘bad-boy’ runs on two-stroke and requires biceps of steel to start, which is a bit of an issue when you have just been diagnosed as suffering from a frozen left shoulder.

I’d toyed with thoughts of; Kevlar trousers, a full face visor, steel shin-guards and chain-mail gloves but after asking my friend Neil for a lesson, and seeing an experts ‘blasé’ attitude to safety, I opted to just go with the steel toe-capped boots and keep my spectacles on to stop the plumes of sawdust from going directly into my eyes.

Almost every household in Galicia owns a chainsaw and most days you can hear one humming away in the distance as the never ending quest for firewood occupies the minds of whole population. In Galicia your mind-set changes from one of, ‘oh dear, the wind brought down that beautiful old tree’, to, ‘I wonder how easily can I cut that up and get it home, it would look great chopped up in my leñera’ (wood store).

The sight of someone walking down a country road carrying a chainsaw is one that you soon get used to. Indeed, you could easily interchange the chainsaw for; a strimmer, an axe, or a rifle, and still no-one would bat an eyelid. Contrast this to the UK where a similar sight would be descended on by a police rapid response unit and you’d find yourself convulsing on the floor with Taser probes attached to your chest…or worse…before you could explain that you are just hunting firewood, or a wild boar.

The reason for the difference?

Spain treats its citizens as grown-ups, the UK nannies its’ citizens like immature children. It has nothing to do with bureaucracy. Paperwork, rules and regulations in Spain are a whole magnitude worse than they are in the UK, hence most people ignoring them, but they revolve around collecting taxes and generating work for bureaucrats rather than telling the Spanish how to live their lives inside a health and safety bubble.

This anarchic approach to personal safety means that our neighbour Miro (in his late seventies) can happily drive his 1950’s tractor the two kilometres to his friend’s house with his wife Elena (in her late sixties) sat on the bonnet in her obligatory gingham pinafore (Galician rural uniform) with her legs hanging down over the front grill. It does look comical, and not a little shocking when you first see it, but has been their way since they got married forty years ago without any mishap, but something which would likely result in a criminal conviction if they were to try it in the UK.

I’m sure that there are probably rules about these things (although the Spanish tend to ignore any European legislation that they don’t like), but the chances of the local law being enforced, or of your neighbours dobbing you in to the authorities, is highly unlikely.

Live and let live….or die, as the case may be.