Out With The Old, and In With The New (Old)

We must be paying our builder Facundo too much, either that or he’s won the lottery without telling us, or perhaps someone else is paying him too much (but I doubt it). I know this because after four years of driving around in a little silver Fiat van he’s gone and bought himself a big truck (grúa as they are known here) with a massive yellow crane.

He arrived in it on Friday, struggling to get up the hill to the barn, in a newly painted (blue and yellow) second hand truck laden down with a new (old) central beam, two new (old) perimeter beams, and about twenty new (really new this time) intermediate beams, all for the bread oven house. His new truck boasts a shiny six metre crane, it’s all about the length with these things, and as he only picked it up on the Thursday he was still far from an expert in deploying it, or come to it, driving it.

He used just a fraction of his available length to offload the beams, transferring some of the new truck paint onto our new (old) beam, giving me another job to sand it off prior to treating and staining.

Facundo is getting used to us and our weird British ways. He now knows that we like old and gnarled and irregular and shun the new and shiny and straight so beloved by Spanish renovators. He was very proud that he’d salvaged (which I hope isn’t a euphemism for stole) a marvellous beam from another old house which is being renovated, and which was surplus to requirements. It had been roughly sanded with an angle grinder and it looks fantastic and will form a great rustic centrepiece in the soon to be roofed bread oven house.

Up until a year after we’d bought the property we’d not been in the bread oven. It was dilapidated, overgrown, and the only way in was through a door which was wedged firmly shut by the roof collapse behind it.

About three years ago I broke in and spent several weeks digging out the waist deep detritus to expose a glorious and complete bread oven and decided to make it ‘my’ project to get it back working.

Since then the weeds had re-established themselves, there had been a big collapse of the wall and cliff that form the back wall, and one of the front walls collapsed on us not long after we moved out here. I’ve spend the last six months cleaning, re-enforcing the rear wall with two tonnes of structural steel and concrete, rebuilding the collapsed walls (front and back) and pointing the whole thing with sandy coloured mortar. 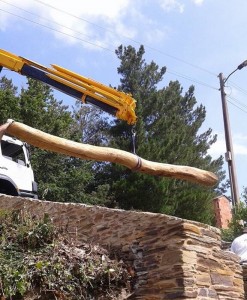 We now need to get it finished so that we can store tools and equipment in it and empty the big house in readiness for its re-roofing in the Autumn so we asked our builder Facundo for a quote, and put in the correct license application. So on Friday the rotten old beam was removed and the new (old) one lifted in to place signalling the start of the works.

I’ll add some photos and updates over the coming days as it takes shape.

This entry was posted in Barn Renovation, The House in Liñeiras and tagged Casa Lineiras, Galicia, Horno, Lineiras, Renovation. Bookmark the permalink.