Getting Back In The Saddle

I’ve sat down to write a new blog entry on many occasions since my homeland voted to leave the European Union.

Sometimes I’ve managed a few paragraphs, other times just a few words, and it has always inevitably led me to a rant at the patent absurdity of my countrymen voting to reduce their personal rights, willingly crash the economy, and isolate themselves from our continental neighbours.

But last nights events in the United States of America have just gone to show that the whole World has lost its marbles, not just the United Kingdom. How a majority of people of a supposedly civilised country can cast their ballot in such a way as to knowingly elect a misogynistic, homophobic, bigoted, racist to the lofty position of the leader of the free world simply takes away my breath.

After agonising and worrying about our future since the momentous decision on the 23rd June, I have now come to the conclusion that we should keep quiet, keep our heads down, get on with our lives, and be prepared to fight with every ounce of our strength should someone want to take away what we’ve earned. I am quietly confident that, whatever xenophobic actions the UK decides to take against European citizens, Spain won’t reciprocate and force our repatriation.

Spaniards that have been willing to discuss our predicament all assure us that we’ll be okay because ‘Spain is a more enlightened, tolerant, liberal, and forward thinking country.’ While I would have argued for the UK in all of these categories in the past, I now find myself conceding on all points, and hoping that they are right.

So…we are going to get on with it. We will plough what is left of our life savings into our property and business, and we will trust that the Spanish government will treat us like human beings rather than the shameful ‘bargaining chips’ approach that the UK government has decided to take to EU nationals.

The last time that I prepared a dispatch the roof was under construction on the big house. After ten weeks of hard labour of a team of four, with me watching on and supplying beer and water, it was finally completed in the middle of July. It looks superb, no longer the hobbit house with a natural shower or two in each room. It is dry for the first time, possibly ever, and from the outside it looks fantastic. 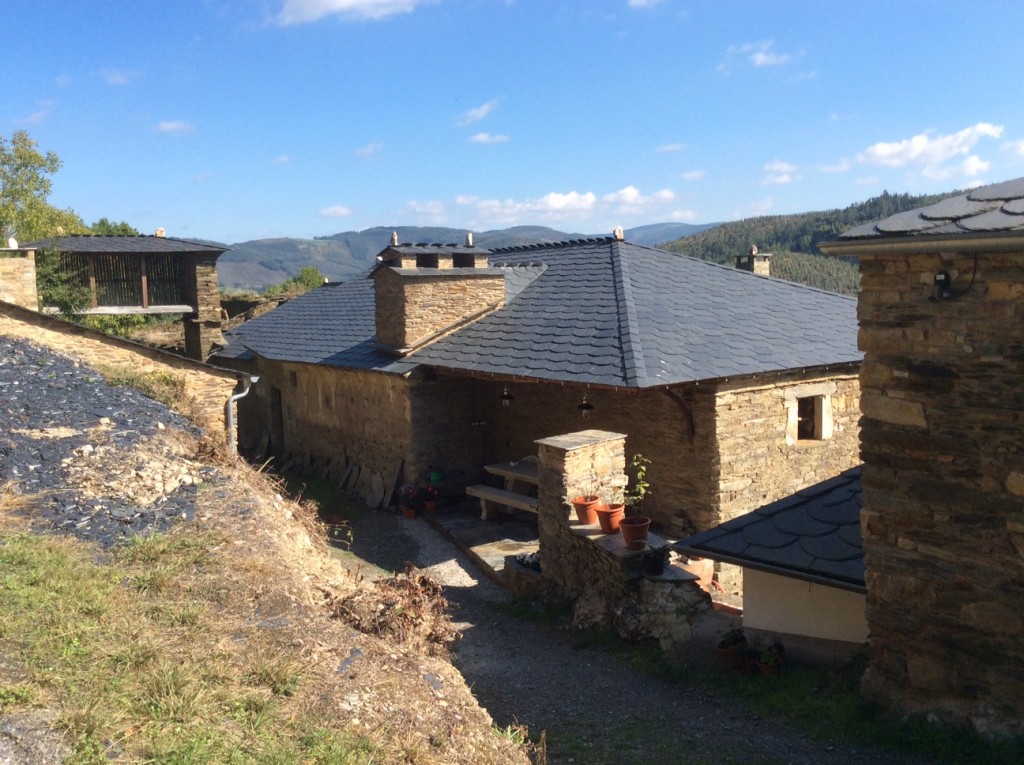 We’ve done a few jobs since then, which I will bring to you in blogs over the coming days and weeks, but I’ve been hampered by injury. I’d been suffering with a freezing right shoulder since just after Christmas, but a couple of months ago it took a turn for the worse with very limited mobility and a constant aching pain. After a month of sleepless nights I acquiesced and agreed to go and see a physiotherapist.

Vanessa is the daughter of one of the local village matriarchs (a lovely lady who organises regular dinners at a local community hall). We’ve bumped into Vanessa several times in the past and since Amanda found out that she was a physiotherapist she went out of her way to spend a few minutes at each fiesta complaining about my posture and general malaise.

We arranged an appointment at her practice in Vegadeo (a twenty minute drive away) and Amanda tagged along to translate. An initial consultation was followed by the attachment of some pressure pads around my shoulder and twenty minutes of relaxing electronic massage (it feels a bit like ants running over your skin) to loosen the muscles around my shoulder. With the machine switched off I thought I was finished for the session, but Vanessa had not even started.

How such a petite lady can inflict so much pain on an ageing and overweight ex-rugby player is beyond reason. She stretched and cajoled, kneeded and prodded, squeezed and twisted, bringing me to tears on one occasion, and prompting me to cry ‘Please Stop Vanessa’ twice. She then prescribed me; deep heat gel, magnesium and turmeric tablets (the latter of which costs €45 for a fortnights supply) all to aid in my recovery.

Four sessions, and a great deal of pain, later and I’m starting to notice some improvement in shoulder mobility. The downside/upside is that I was banned from any labouring for the first three weeks, and am only now re-assuming light duties.

So very little has been achieved in the last month as I have worn a groove in the arms of my favourite chair and tried to write this blog on several occasions.

After a break of six months I will try and report more frequently…promise…while keeping my head down and not watching the news for fear of another global disaster.

This entry was posted in Local Life and tagged Galicia, Lineiras. Bookmark the permalink.

1 Response to Getting Back In The Saddle