We’d planned to go to the stone masons near Mondoñedo on several occasions and on one occasion had even got part way there before turning back. We were interested in a couple of things; an old stone trough to go under the outside tap on the overhang (where there was a big concrete and brick clothes washing contraption which we wanted to demolish), and a quote for carved stone quoins and lintels for all of the windows and doors on the big house.

Then in mid-June we looked up the relevant Spanish words, and finally completed the forty-five minute journey to middle of the Galician countryside, navigating solely from the memory of a visit with Facundo the builder about four years ago, and located Canteras Licho, although at the time we had no idea what it was called. But rather than buy an antique stone trough, or solicit the required quotation, we bought a massive granite table and two benches, and in doing so we gave ourselves a whole load of hard work.

We both fell in love with the white carved granite table and despite it costing as much as a small car, and weighing considerable more, we decided that we must have it. It was a proper ‘grown ups’ table, seats ten in comfort, and we decided that it would look fantastic under the overhanging roof. The area we had in mind is sheltered from the midday heat and perfect for an al fresco lunch, but also gets the far less ferocious late afternoon sun until it dips behind the barn.

Canteras Licho had made the table and benches around six years ago, just as the financial crisis struck in Spain. They told me that they’d been selling around one a month prior to the ‘crisis’, replacing the sold one with a newly made one, but this one had remained unsold since then. I think that they hoped that it was a signal that the crisis was coming to an end.

Eventually it would be in a communal area and guests using the apartments would be free to use it for family meals or simply sipping a glass of local wine and picking at tapas.

We negotiated a price, to include delivery and installation (subject to the boss coming to our house and ensuring that he could get the necessary crane close enough to lift it into place), and set a delivery date for the second week in September, just ahead of a visit from my Mum and cousin Sue. We would keep it a secret from the world until then, no social media, no hints to anyone, and much care when Face-timing and SKYPE-ing relatives.

But now the real work began.

Over the next seven weeks we; cleared the area, raked out and pointed the walls, moved the tap to a different wall, put in drainage and built retaining walls, backfilled with hard core, laid a metal reinforcement bar mesh, mixed and poured forty-five wheelbarrows full of concrete (with a slight pause for a trip to Neil’s for him to weld the cement mixer back together), faced brick walls with stone, built stairs down to the barn, and cut and laid fifteen square metres of old roof tiles as a floor. 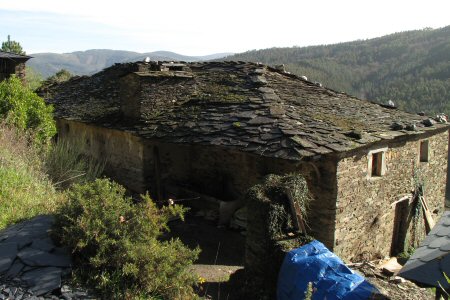 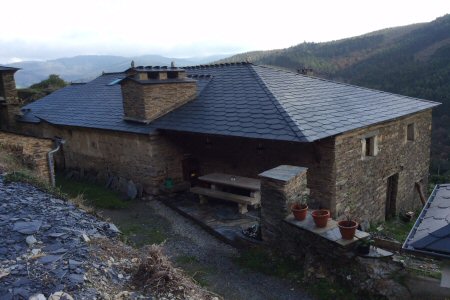 The second week in September arrived and good to their word the installation team arrived with the table. After much head-scratching, and the construction of a ‘Heath-Robinson’ contraption fitted to the truck-mounted crane to enable it to get underneath the overhanging roof, three hours passed very rapidly and the table was finally swung into place. 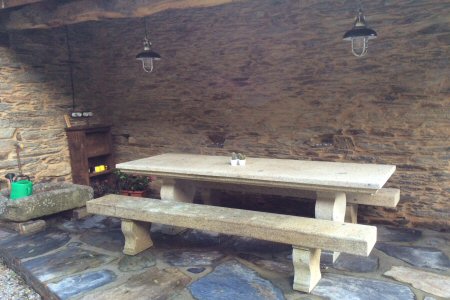 The antique trough, bought elsewhere, arrived the same day courtesy of our builder who collected it and helped us install it. The electrician attended to fit the lights, that we’d had shipped over by a UK company, and some electricity sockets. And now we have a proper grown-ups seating area. 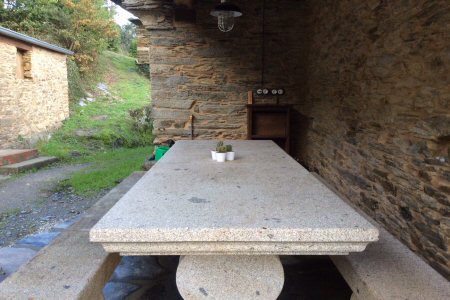 Mum and Sue were amazed. They were amazed at the change since their last visit, but more amazed that we’d both managed to keep our exploits off social media for the duration.

From mid-September the table has been put to use on many occasions for snacks, drinks and we even forced our English friends to sit outside for a chilly evening meal, but sadly it is now too cold to spend much time out there. We’re looking forward to the Spring and taking full advantage of our new outside room.

We’ve still not got a quote for the quoins and lintels.