We revisited the house at the beginning of September, our sixth trip in ten months. This time Mother was in tow, keen to see the pile of rubble that we’d acquired prior to our starting work on it. The main reason for the trip was to meet with Fernando and Luz, our University architects, and to take delivery of our site survey plans.

Since committing to buy the house, each trip had started in the same way with a visit to the house, and this one was no exception. We dropped our bags in Taramundi, mainly to make sure that Ramon had made our reservation as promised, and then in the hire car through Pontenova to Liñeiras.

We hoped for a quick look around to a chorus of ‘ooohhs’ and ‘aaahhs’ from Mum and then back up to Taramundi for a drink or two prior to some nice Asturian hospitality at our, now favourite, restaurant. Our flying visit didn’t go exactly to plan. 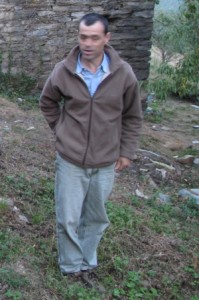 As soon as we pulled up at the property our ‘squatter’ Carlos appeared, somewhat surprised by our unannounced incursion into his domain. I’d not managed to get a photo of Carlos during our previous encounters and spotted my chance as he talked to Amanda about all the work that he’d done on our land since we were last there (for those of you worried by Carlos in the photo I’d like to emphasis that he isn’t alien or shape-shifter, just animated at the time that I took a longer than sensible exposure).

Next Carlos’ Mum arrived, probably come to see why he’d not come home for his tea, and the usual conversation started. ‘Do you have children?’ she asked. ‘No’ replied Amanda triggering the ubiquitous pitying face. She then claimed that the house was lived-in up until five years ago. Possibly by rats, I thought, but surely not by humans. 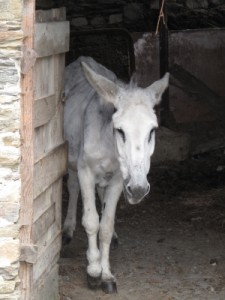 El Burro in our Barn

Before we left, I wanted to get into the barn (soon to be renamed the small house) for a quick re-orientation but found my way blocked by ‘El burro’, Carlos’ donkey who’d taken a dislike to me on our last visit. I suspect Carlos had been talking and his white donkey was guarding his home with even more menace than on the last trip.

Carlos chanced his arm and asked if he could winter his horses on our land suggesting that if we left it untended then we’d get ‘bad grass’. We suspected that ‘bad grass’ properly translated as ‘weeds’, but not wishing to take a chance, and fearful of becoming a triffid nursery before next spring, we gave our blessing.

The house was still there, Mum had been stunned into silence (which can’t be a bad thing), and the land was being well tended by Carlos and his menagerie. In the morning we were scheduled to meet the architect, everything was crossed for good news.

This entry was posted in Background, The House in Liñeiras and tagged 13, Asturias, Lineiras, Neighbours, Trece. Bookmark the permalink.

1 Response to We’ve got squatters