Something which sets Galicia, and for that matter neigbouring Asturias, apart from the rest of  Spain is the proliferation of strange looking square or rectangular vented buildings raised up on stilts, often with no visible means of access. The are the hórreo.

While you can see the odd one in suburban Madrid, and even as far as the costas on the south coast, these have often been bought from the north and then moved brick-by-brick to a new ‘false’ home. Galicia is the home of the hórreo. 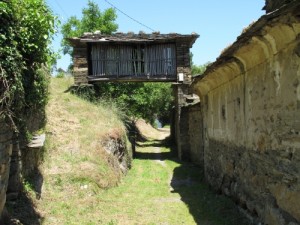 The hórreo, the north Western Spanish grain store is first recorded in the documentary evidence in the twelfth century. They can be any size from a metre or so long to the longest at a reported 35 metres in Carnota, near Ribiera. They are built out of stone or wood or both and were integral to Spanish life up until half a century ago.

There are hórreo elsewhere in Europe but there is a massive concentration in Galicia and Asturias and, as a pre-requisite for our house purchasing, almost all of the houses which we considered during our search had one. The property that we ended up with has two, although one of them is in a very poor state of repair.

Thanks to wikipedia for the following definition;

We saw all shapes and sizes of horreo on our house-hunting and there are just a few examples below (click the photos for larger images) ranging from the weediest and most insignificant at a property near As Pontes to the grand hórreo valued at around 20.000 Euros at the house that we nearly bought at O Paramo. 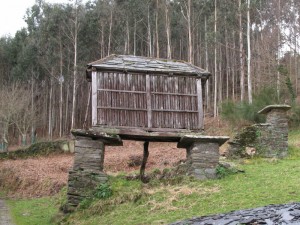 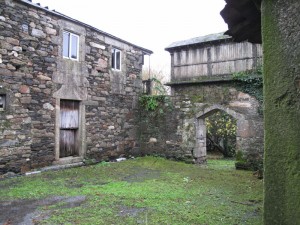 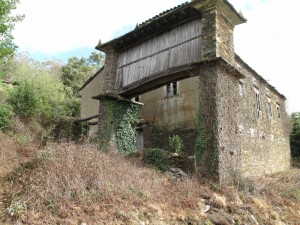 Hórreo at one of Julios houses in the Tura Valley 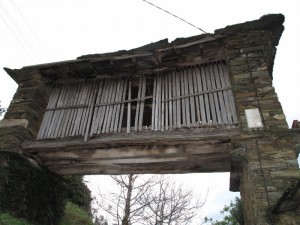 Close-up of our main Hórreo 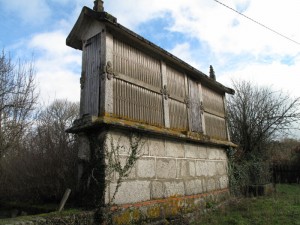 The beautiful Hórreo on a granite base at O Paramo, that we fell in love with

All hórreo in Galicia and Asturias which are in a repairable condition are now listed. You cannot remove or destroy them and they must be renovated in a sympathetic manner, for which there are grants available from the local and Galician governments. The size of the hórreo is indicative of the size and importance of the family that lived in the house.

We will certainly be renovating ours as part of the work on the main house and we will either end up keeping it empty as a talking point, or using it as a store for bicycles and fishing tackle. It is normal to have carved stones at the top corners of the pitched roof and I have a special plan for ours which will be revealed when I determine whether the regulations will allow me to do it.

Our second hórreo is borderline recoverable as it is in very poor shape with all of the roof and wooden structure lost to the elements many years ago. It is also quite close to the house and could block out the sunlight. We need to check on what we are allowed to do and then see what the architect suggests. Hopefully we’ll end up with something that looks at least as good as the restored hórreo at Casa Do Mudo, the Casa Rural where we spent our first night on Galician soil back in November 2009. 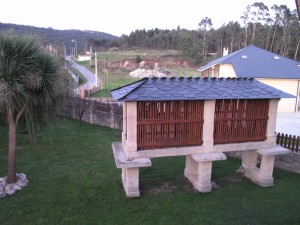 This entry was posted in Local Life, The House in Liñeiras and tagged Asturias, Galicia, horreo, Lineiras, Trece. Bookmark the permalink.

2 Responses to No horror in hórreo