The ancient home of the celts

Apart from the business that we needed to conduct on our last trip, we also decided to take an extra day and hit some of the local tourist trail. On the Friday morning we set off for Oviedo where we would later indulge in the tapas I mentioned in the last blog entry, and try our hand at the famous Asturian cider. On the way we made a slight detour to Castro de Coaña, a ruined 4th century B.C. Celtic hill fort settlement.

The site, near the village of Coaña is just a few miles south of the A-8 which runs along the north coast, and about twenty minutes drive east of Ribadeo, and it is well worth an hour of anyone’s time to visit. 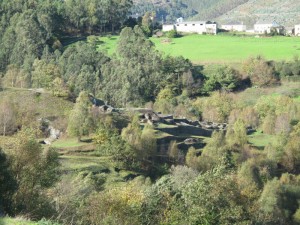 A glimpse on the approach

When we arrived at the large, grass roofed, visitor centre around 11am the place was totally deserted apart from two ladies, one manning the ticket kiosk, and the other the small souvenir shop. Entry was about 3€ each which allowed you take as long as you wanted to meander amongst the ruins before getting back in out of the autumn wind to peruse the small museum of artifacts discovered during archaeological digs on the site over the last century or so. 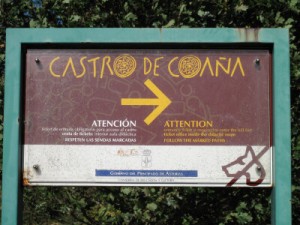 A short path through a field lined down the edges with upright stones (a twenty-first century addition) and through a security gate (unmanned) and you are into the complex which was once home to several hundred Celts living in the 80+ stone huts that have so far been discovered. Some of the site still remains unexcavated. 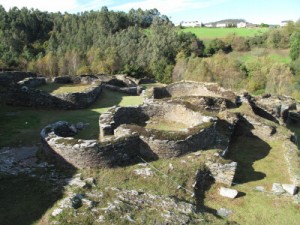 Over eighty round stone huts

The site is built on a steep escarpment and protected by natural cliffs on one side and a moat and wall arrangement on the other. The houses are on three standard floor plans and most of them are detached with only a small number sharing ‘party’ walls. They range from the smallest at little more than two metres diameter to some much larger at seven plus metres across. 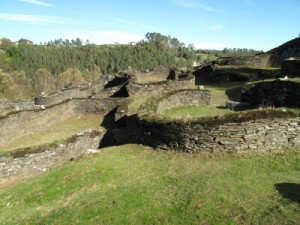 The site also has some communal facilities such as drainage, a town square, an acropolis (citadel) and even what are believed to have been saunas (with fire places, a bath, a boiler and drainage channels). 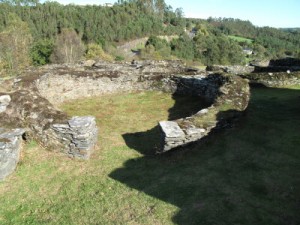 Would have been thatched with a central fireplace

Most of the buildings were thought to be about two metres high but there is some archaeological evidence that some may have been two stories probably with sleeping on a mezzanine floor to take advantage of the warmth from the animals below. Littered on the floor of some of the houses are large granite blocks into which have been carved holes. These are thought to be mortars, originally placed near to the fireplace. 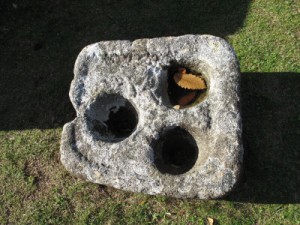 Other artifacts found on the site suggest that it was in use for five or six centuries, and from the finds it seems that there was a degree of Romanisation, before it was abandoned and covered over until being discovered in the late 19th century.

It is a magical site, especially when you have it entirely to yourselves on a chilly autumn morning. Your mind doesn’t have to try too hard to imagine it as a bustling village, echoing to the sounds of children and animals and full of the smell of food cooking on over eighty open fires. Well worth an hours diversion on the way to, or from, Asturias airport, just not on mondays as it is closed.

This entry was posted in Local Life, Places to Visit and tagged Asturias, Ribadeo. Bookmark the permalink.