The bread oven house, or so they say

It was the Moors who introduced the tradition of the horno (pronounced or, no) to the Iberian Peninsula and one which Galicia embraced with both arms. Almost every property that we saw while seeking out our ideal casa had one, and they came in a whole variety of shapes and sizes.

The traditional Galician Horno is usually attached as a single storey, stone built, slate or stone-roofed, semi-circular building to the side of a house, and they are not too hard to spot. The one pictured on the left below was attached to the Rectory House which was my ‘first love’, as the first house we visited, on our very first trip to Galicia, and which Amanda very sensibly talked me out of as a ‘terminal money pit’. 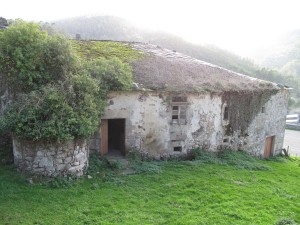 These Horno have a waist height small opening to the inside of the house, often in the kitchen, with a metal door which latches shut to keep the heat in. To use them you light a fire inside which you let burn for three to four hours before raking out the embers leaving a stone cooking surface and a domed oven which will retain cooking temperature heat for twenty-four to forty-eight hours.

You can then use the oven to cook whatever takes your fancy, although this will almost exclusively be bread, and the occasional suckling pig. Once the oven has cooled you then start the process all over again.

These ovens make great features in main houses, ad many are restored to working condition like this one that we found in a house near As Pontes. It was the only part of the house that had been restored, apart from the roof, and was used by the owners family when they visited for picnics and nights camping on the 22 acres that comprised the property. 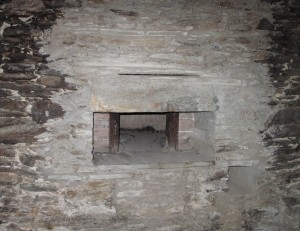 Here is one ripe for restoration which was inside a property in the south of Galicia, near Tui. All it needs is a good sand/water blast to remove the bulk of the soot and small child to send in there to give it a good sweep out, and it would be ready to work again. 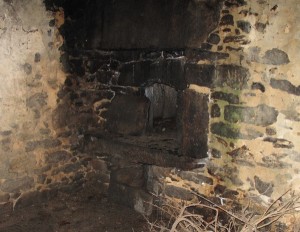 Occasionally you get to see the Rolls Royce of horno, one which is attached to an open cooking fire, a  lareira (as I have been informed it is spelt). Here a central fire is used to cook in big pots, with smoke and smells going up the large chimney, with the oven behind. The bench seats are where the family would sit to keep warm in winter and eat there meals. There can be few things more romantic, if you can see past the stark wooden benches. 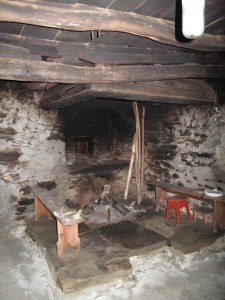 What about Casa Liñeiras? I hear you ask.

Well…we have an horno too (in theory) and ours is in a separate building to the main house. This is a supposed mark of prestige and importance of the house, as it means that the casa de horno would be available to the villagers to make and bake their bread.

I say ‘in theory’ as we haven’t yet seen inside our horno. The roof of the house has caved in and there is stone behind the only entrance door blocking our ingress. We haven’t wanted to force it open as we’d have no means of then securing it. 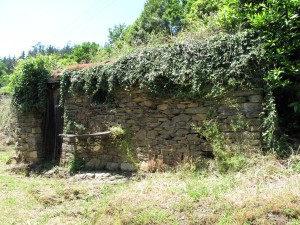 Our horno from the front

This little house is pretty substantial, some twenty square metres with a single door and small window above an ancient shelf which we assume was used to hold baskets of dough for proving prior to baking. In the far left corner is where we believe that the oven is, cut into the stone of the hillside and with a long vanished chimney at ankle height as you stand on the road above. 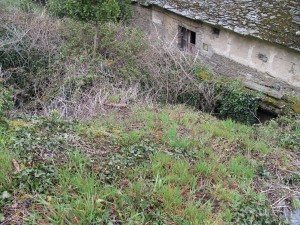 Our horno from above

The area in the foreground is where we believe the oven to be and the rest of the room would have been for preparing and cooling the bread. This little house is one which I hope to renovate myself once I have spent many hours spying on the builders and their techniques. We intend to restore it to a fully functioning bread oven, and who knows, if you visit us in a couple of years time you may wish to try your hand at baking your own breakfast?

What could be more satisfying?

3 Responses to The bread oven house, or so they say