Spain appears to be shut

As the clock hit six in Galicia last night, five o’clock here in the UK, my mailbox was once again full to overflowing with Spanish e-mails.

It was like Christmas Eve, not for their contents but because their despatchers were trying to get them out of their minds and consciences so that they could mentally shut down for the start of Semana Santa (Holy Week) with the first celebration of maundy thursday.

One of them was from our solicitor Inma and contained scans of the registration document from the Catastro (Cadastre). This has a small error on it, allocating a piece of land that we own to someone that we’ve never heard of nor ever seen mentioned in any previous documentation. It’s not a show stopper, but a small worry, so we responded this morning with an attached read receipt. BUnsurprisingly it has not been acknowledged.

If you can’t beat them, join them (I’ve already mentally packed my bags for home).

As a devoutly Catholic country (although increasingly less so) it is no surprise that Easter gets the full treatment of bank holidays, feasts, processions and all kinds of other goodies. The only places open will be the bars, cafes and restaurants.

When we were in Santiago de Compostela at this time last year we happened upon a procession similar to those happening all over Galicia and indeed Spain, last night, tonight and on sunday. 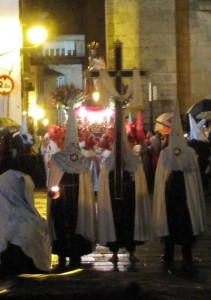 One of many processions

The first thoughts of a non-Spaniard when seeing the ceremonial robes, with their pointed hats (Capirote), is to draw a parallel with the heinous KKK (a most anti-Catholic organisation). This couldn’t be further from the truth. These hats are designed to hide the faces of the wearer for humilities sake and as a penance, but historically were also worn by those found guilty during the Spanish Inquisition to humiliate the wearer.

Hopefully our e-mails will get a response next week, at least the Spanish won’t be taking the day off for the royal wedding! Although if someone suggested it……

This entry was posted in Local Life, Places to Visit and tagged medieval, Pilgrims, Santiago. Bookmark the permalink.