If I cast my mind back far enough I can just about remember that I got a grade D at A-level for Economics, only marginally better than the ‘fail’ that I got for European History. Poor Mr Metcalfe did try and help me along with my understanding of ‘supply and demand’, ‘keynsian economic theory’, and ‘economies of scale’ but I most remember him as the ‘person in authority’ who kindly signed the back of the photo included in my first British passport application.

I’ve definitely got more joy out of my passport than I’ve ever taken from economic theory. In a way Mr Metcalfe is responsible for travel around the globe over the last twenty-five years. 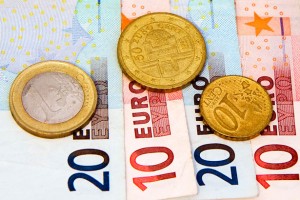 The ticker ‘plug-in’ on the right shows the current interbank (two to three cents above the currency exchange rate available to us mere mortals) value of the Euro against the pound. After a high in the last twelve months of 1.23560 (Euros to the Pound) it is currently trading around the 1.14 mark, which means that for £10,000 you would be getting almost €1,000 less than you would have been at its height.

Blimey, now I’m sounding like an economist. Mr Metcalfe would be proud!