Mark Adkinson who runs Galician Country Homes deserves his own blog post as part of our background story for two reasons;

We visited Mark at his house in Rábade near Lugo, a home which he and his wife have lovingly restored by hand, and which contains many of its original features. Sitting beside the larger than life character (you’ll know what I mean if you ever meet him) we were shown twenty or so properties on his website (with additional photographs) from which we selected half a dozen to view.

First stop was a house near O Páramo south of Lugo (and it could have been the last), as over the next hour we discovered what was pretty close to our dream house. Approached down a 500m private mud driveway, the house was set on its own with three barns, and the foundations of a medieval watch tower. From the property you could see no other houses, no signs of civilisation, and it was so quiet that all you could hear was the wind in the trees and the occasional bird song. 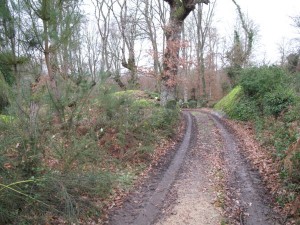 The house was massive, over 420 square metres per floor over two floors. The foundations were erratic boulders dropped by receding glaciers. It was built entirely of granite, had a separate bread oven house, a very grand horreo, a decent amount of land, a courtyard, and three barns, all of which could be converted into living accommodation. 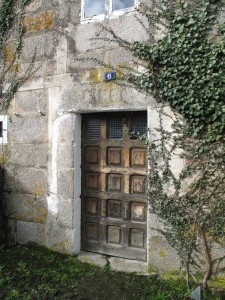 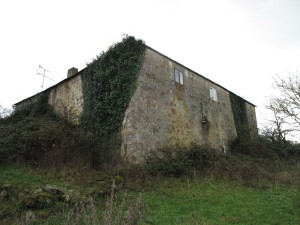 Back of the Priest House 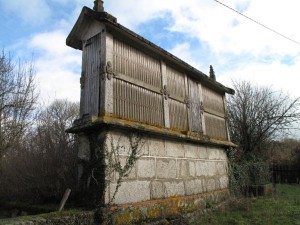 After a leisurely walk around the property, and already besotted, there were more surprises to come. Inside the house, wandering through the six upstairs bedrooms, it was clear that something was not quite right. The upstairs space didn’t match the room downstairs (mostly cattle pens). Mark explained that there was a secret room which could only be accessed through a disguised trapdoor in the corridor downstairs. He went on to explain that local folklore suggested that the room was a hiding place for priests during the Spanish Civil War persecutions and massacres of the 1930’s to 1950’s. We immediately coined the name ‘The Priest House’. 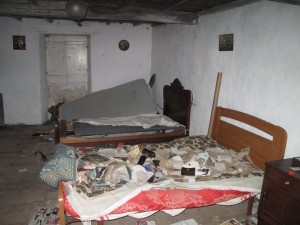 The house was very strange inside. It had been abandoned in the 1980’s and felt as though the large family that once called it home might walk back in at any moment. Half drunk bottles of wine, made beds, clothes and shoes in the wardrobes, photograph albums and dirty plates in the sink. It was more than a little eerie, like the Mary Celeste.

There was massive scope for the property, it had everything we were looking for. It was just a little far from the airport and the coast, but as there was a pilgrimage route within 10km we brushed aside our fears and decided that this was the house that we wanted. The problem was that it was on the market at a budget-busting 143.000 € (£130,000 at the time).

We were recommended an architect by Mark who we immediately called and asked to take a look at the house and give us an estimate of renovation costs for the main house. He scheduled it in for later in the week, sadly after we’d gone back to the UK.

On leaving the property to travel to the next valley to look at another house, we had one of those moments that you remember for the rest of hour life. Mark was driving his MPV with myself in the front and Amanda in the back seat when he slowed and pointed out a boar up on the hillside in front of us. We stopped and watched as the ‘boar’ stood up on its hind legs and walked across the field into the woods. ‘That’s no boar that’s a bear’ (un oso). Although brown bears are native to Asturias and Galicia there are thought to be only around thirty of them, and it was the first that Mark had seen in over twenty years in Spain.

Mark called a friend in the local wildlife movement to report the sighting and he was pretty excited gauging by the shouting in Spanish on the other end of the phone. The authorities were apparently aware that there was a young bear in the area who had been thrown out of his ‘sloth‘ and he’d left a trail of smashed bee hives from Asturias and into Galicia. They had lost track of him a few days previous and were delighted to have got a tip-off to his whereabouts. We were absolutely buzzing…all three of us.

The other houses that we saw with Mark didn’t come close to the Priest House. After returning to the UK we got an e-mailed estimate for renovation from the architect which blew the project (with the high purchase price) outside our budget. Several days of manic depression followed, as now the dream seemed further away than ever. We talked ourselves into the house being too far from the coast and too far from the airport, but it would have been perfect and we were very disappointed.

Plans were made to ‘get back on the bike’ and make another trip in March. Maybe this would be the trip when we would find our dream home? Perhaps we’d even see another bear.

3 Responses to Our second visit – part two – time with Mark