Within the space of twelve hours I’ve had two big dollops of local Galician life, and thoroughly enjoyed both as a nice break from working on the house.

On the way home last night I bumped into my new friend, car mechanic/building guru, Neil and had a couple of beers in a local hostelry. As we departed he invited me to join him and his wife Rosa at a barbecue to be held in Pontenova. After explaining the potentially restrictive nature my vegetarianism at such an event, I agreed.

It was a small gathering (25 to 30 people who all knew each other and were probably related) in a quaint little community centre about 2km outside Pontenova. It was a special festival which was being held in celebration of the humble chestnut. The alcohol was flowing from the minute we entered, and chestnut soup was followed by chorizo and ribs (a plate of cheese brought for me, the awkward one) and then a local bread and butter pudding desert, and as many roast chestnuts as you could eat. All this was washed down by as much local wine as you wanted, coffee, and then liqueurs (I went for the safe option of Brandy).

Good conversation, in a mixture of English and Spanish, was followed by an old miner from Pontenova playing half a dozen tunes on his Galician gaita, although I could barely discern the differences between each one except perhaps slightly longer pauses between some of the notes.

We made out excuses just before 2am and departed, although I think that the real party had barely begun, the chestnut was to be celebrated long into the night.

My plan was to rise early and hit the market in Meira which I had been told was worth a trip, if only for the freshly cooked octopus (pulpo). I woke late, decided on a bit more of a lie in, and set off for Meira (25km away) around 10am.

The market was much as I expected. Most of the stalls were selling socks, clothes (mostly from the 1970’s and 80’s), shoes and cheap watches but there were also quite a few selling knives and axes (most of which it would be illegal to own in the UK), fruit and vegetables, cheese and ham, bread and pastries and the local wine/firewater in unlabelled bottles for a few euros. 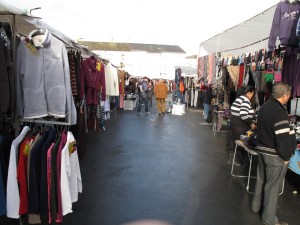 There were very few people at most of the stalls, and the majority of the menfolk (about three quarters of those in attendance were men) were either at one of the bars, huddled round one stall selling hardware (ferretería) trying to find a bargain, or around the live animals section where you could buy chickens, rabbits or ducks (including a box full of the cutest little yellow ducklings imaginable). 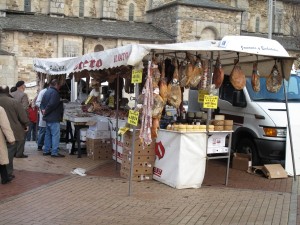 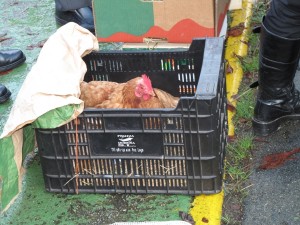 I had a  good wander round, perhaps three or four times, and when I saw that people had started patronising the impromptu pulpo restaurants I decided that it was time for me to indulge in the ‘breakfast of kings’. 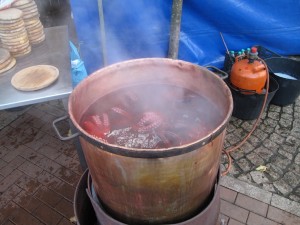 Octopus being cooked in copper pots

Seven euros got me a wooden plate piled high with pimenton and olive oil covered octopus, boiled in massive copper pots, a good chunk of bread and a bottle of local wine (shame I was driving and could only drink one glass full). I seemed to start a trend and soon the place was heaving, everyone tucking into their pulpo, chattering away and all thoroughly enjoying it. 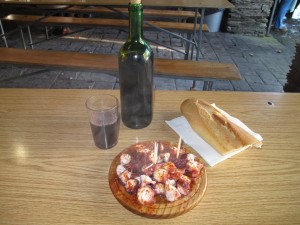 The breakfast of kings

The pulpo was so good (or the wine so alcoholic) that on the way back to the Land Rover I celebrated my breakfast by buying two kilos of cheap apples…all for Enrique!